Reno said this after the clergyman failed to secure a single vote at the just concluded APC Presidential primary. This comes after a video of Bakare while preaching in his church prophesying that he will be the next President after President Buhari leaves office in 2023, started trending again.

”To all those who allow their pastors tell them who God says they should marry or not marry: Can you see how what Pastor Tunde Bakare claimed God told him panned out? Some of these pastors manipulate your belief in them. Believe in God not your pastors!

Tunde Bakare is a well known manipulator. He has lied in God’s Name not once or thrice. Please research these by yourself: In 1999, he claimed God told him Obasanjo would die and not be sworn in. In 2006, he claimed Buhari was part of Nigeria’s decaying past. In 2018, he said God told him he would be our 16th President!

Why am I calling him out? Because if we do not, he will explain this away and fool people with more lies in future.

Pentecostal and evangelical pastors are some of the most unsupervised people. In denominations, like the Catholic Church, they have a structure that helps a priest separate his delusions from the word of God. But with these churches, there are no such demarcations!” 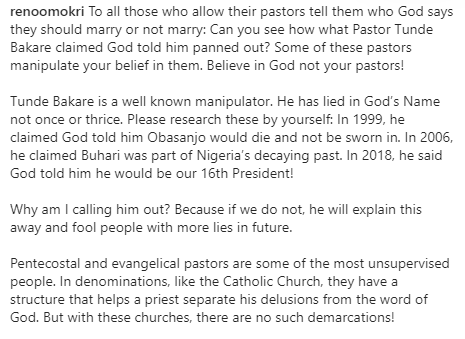 Featured Posts
Strike: FG Reveals What Will Happen To ASUU
22 mins ago