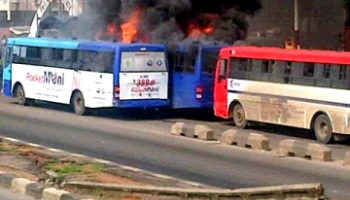 Passengers and others commuters were caught by surprise on Saturday as a Bus Rapid Transit (BRT) caught fire.

The incident happened at Anthony Bus Stop in Lagos. The inferno ravaged the rear side of the bus and kudos to the driver for acting fast and not being much terrified by the incident.

However, the officials of Lagos State Fire Service responded quickly to put out the fire.

It would be recalled that three people were killed recently when a Dangote truck rammed into a Bus Rapid Transit (BRT) at Majidun area of Ikorodu, Lagos.

Two employees of Primero and a female passenger were killed in the accident.

prof_goldencollins
Maintenance is a huge problem in Nigeria, well how can they afford to maintain the brt busses when Tinubu and his family members and touts have all siphoned the money meant for these basic things.

@prof_goldencollins so,a bus exploding is a result of maintenance again ? Do you even know that the buses are owned and operated %100 by a private company? Google is your friend. We shouldn’t be too quick to jump on government government all the time. Check for Primero transport services limited.