As part of efforts to improve access to quality healthcare, Governor Adegboyega Oyetola, on Thursday, flagged off mass distribution of Osun Health Insurance cards to over 69,000 vulnerable citizens in the State. 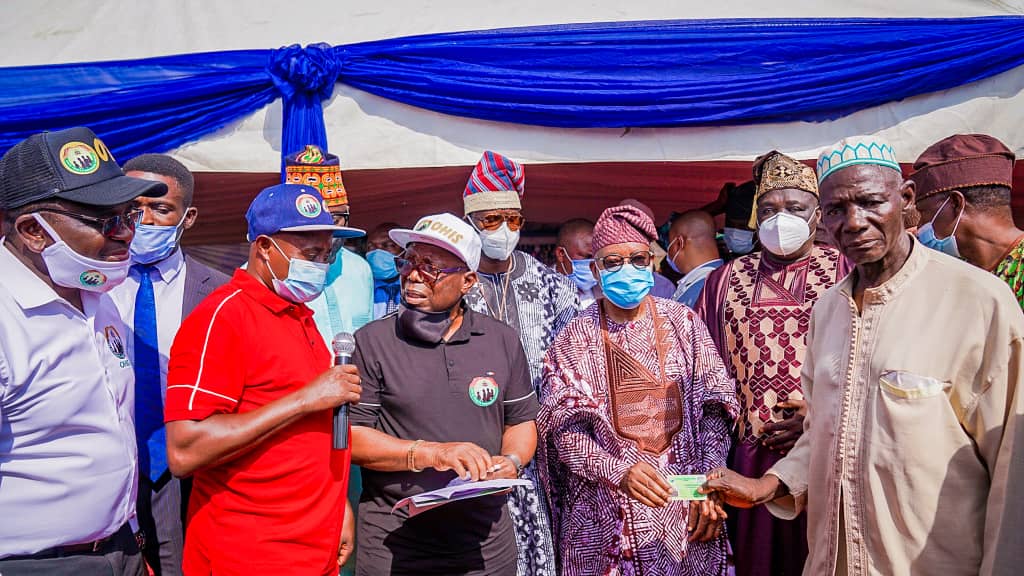 The initiative is aimed at eliminating the palpable gap between the rich and the poor in accessing quality and qualitative healthcare service delivery.

This is even as the Governor reiterated that his Administration’s broad-based economic revitalisation agenda was targeted at putting the economy on sure footing.

Recall that the Osun Health Insurance Agency has successfully enrolled 69,273 vulnerable persons who have been receiving healthcare services in the last two years under the Basic Healthcare Provision Fund (BHCPF).

Speaking at the flag off ceremony, held at Ede High School, Ede, Governor Oyetola said the ceremony marked a watershed in the Administration’s quest to ensure that no one was left behind in accessing qualitative healthcare.

He said the Administration had particularly engineered the Osun Health Insurance Scheme (OHIS) with a view to making all citizens have access to better healthcare.

To demonstrate this commitment, Oyetola noted that a sum of N150million was released as take-off grant for the Agency and over N477million as equity grant meant for the premium for the poor, the needy and the vulnerable within the first year in office.

According to him, with about 300,000 residents already enlisted on the State Social Health Insurance Scheme (OHIS) and 195,565 successfully enrolled and accessing care under the Scheme, OHIS is up and running well, and the government is proud of it as one of the leading State Health Insurance Agencies in the country.

“To further strengthen the Scheme, we have consistently paid the government’s share of public servants’ health insurance premium which is 3% of workers basic salary and paid the equity grant meant for the provision of treatment and care for the vulnerable/less privileged people in the State free of charge, making us the second in the entire Federation to do so.

“It is indeed heartwarming to note that in recognition of the achievements of the Agency, the United States Agency for International Development (USAID) selected OHIS for piloting the Integration of Tuberculosis (TB) with State Social Health Insurance Schemes (SSHIS) in Nigeria in collaboration with their consultants at Equitable Health Access Initiative (EHAI).

“The programmes have just been completed and the enrolled patients are already receiving treatment for TB across the State, as part of the OHIS Equity Programme for vulnerable persons.

“Also, in recognition of our sterling performance in the health sector, I have been selected for decoration as Ambassador for Better Health at the Universal Health Coverage (UHC), Summit being organised by the UHC 2023 Forum in collaboration with Chatham House, London and will hold at the Yar’Adua International Conference Centre, Abuja, come 16th December 2021,” Oyetola added.

In his welcome address, the Chairman of the Osun Health Insurance Agency Governing Board, Hon. Andrew Adeoye Adelakun, lauded Governor Oyetola’s commitment to the Scheme, noting that the initiative has been sustained by the tenacity of the Governor.

According to Adelakun, Oyetola has never failed to remit the 3 per cent government’s contribution, including the 1.5 per cent of staff monthly deduction to the Agency in the last three years of his Administration.

“This has greatly helped to reduce out-of-pocket expenditure on health of residents of the State, most especially the public servants, the vulnerable and the poorest of the poor.

“The government of our dear State is aware that not everybody is able to pay and inability to pay should not be a hindrance to accessing quality healthcare. Our Governor sees access to healthcare as a matter of human rights which should not be denied to any resident. This is why even the vulnerable population has been given serious consideration”, Adelakun said.

In his remark, the Timi of Ede, Oba (Dr) Munirudeen Adesola Lawal, commended Oyetola for keeping his promises to the people, adding that “it is both a mark of responsible leadership and true democracy.”

The monarch further said; “We are grateful to God and to you that the promises you made to the people while seeking election into office are being fulfilled systematically and sequentially. The mark of a responsible leader and administration is that promises are fulfilled. This is also a true mark of democracy.

“We are grateful to God that we have you as Governor. People who have gone to health centres on the strength of this Scheme have continued to testify, and this continues to give us the needed assurance of your commitment to the wellbeing of the people.”

Oginni said Oyetola has surpassed all other Governors through his commitment to the promises he made to ensure qualitative healthcare delivery to the citizens, announcing that Oyetola is to receive an award as Ambassador for Better Health in Nigeria from the Universal Health Coverage (UHC) Forum on December 16.