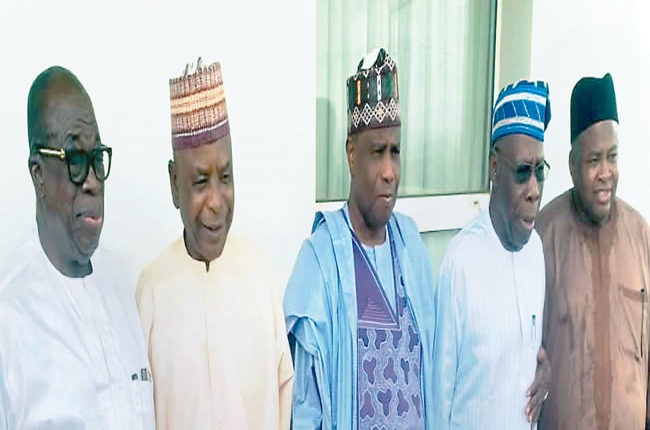 It stated that Tambuwal arrived the penthouse of the Olusegun Obasanjo Presidential Library at about 1.30pm with some aides and went straight into the meeting.

According to the statement, the meeting ended at 2.40pm.

The statement, however, did not give details of the national issues discussed.

Meanwhile, the PDP through its spokesman, Debo Ologunagba recalled how the opposition party had on various occasions alerted that the APC government had ceded sovereignty over a large portion of our country to terrorists, “many of whom were imported into our country by the APC.”

He further stated: “From the video, in a brazen manner, terrorists as non-state actors boldly showed their faces, boasting, admitting and confirming their participation in the Kuje Prison break, some of whom were former prison inmates who were either jailed or awaiting trial for their previous terrorism act against our country.

“Nigerians can equally recall the confession by the Governor of Kaduna State, Mallam Nasir el-Rufai that the APC government knows the plans and whereabouts of the terrorists but failed to act.

According to Ologunagba, about 18,000 Nigerians have been killed by terrorists between 2020 and 2022 “as the criminals continue to be emboldened by the failures and obvious complicity of the APC and to which the PDP had always drawn attention.”

“This is not politics; this is about humanity and leadership, which leadership sadly and unfortunately is missing in our country at this time,” he said.

The PDP added that it is appalled by “the lame response by the apparently helpless, clueless and deflated Buhari Presidency, wherein it told an agonizing nation that President Buhari “has done all and even more than what was expected of him as Commander in Chief by way of morale, material and equipment support to the military…”

“This is a direct admission of incapacity and failure by the Buhari Presidency and the APC. At such a time, in other climes, the President directly leads the charge and takes drastic measures to rescue and protect his citizens.

“It has now become very imperative for Nigerians to take note and realize that the only solution to this unfortunate situation is to hold the APC government accountable. We must come together as a people, irrespective of our political, ethnic and religious affiliations to resist the fascist-leaning tendencies of the APC administration.

Ologunagba called for an urgent meeting of the National Council of State to advise on the way to go over the nation’s worsening insecurity.

“Our nation must not fall. The resilient Nigerian spirit and ‘can-do- attitude’ must be rekindled by all to prevail on the President to immediately and without further delay, accede to the demand by the PDP and other well-meaning Nigerians to convene a special session of the National Council of State to find a lasting solution since the President has, in his own admission, come to his wit’s end,” the PDP spokesman declared.

Featured Posts
Strike: FG Reveals What Will Happen To ASUU
26 mins ago