This is our coverage of the election of the Speaker and Deputy Speaker of the House of Representatives.

The race for the Speaker of the House of Representatives is a two-horse race between Femi Gbajabiamila who is APC’s preferred candidate and Umar Bago also of the APC but heavily backed by the opposition party, PDP.

So far, only one candidate, Idris Wase has declared interest for the deputy speakership.

Senator Ahmad Lawan has been elected president of the Senate.

Ovie Omo-Agege, the lawmaker representing Delta central, has been elected deputy president of the Senate.

He secured 68 of the 107 votes in the election to defeat Ike Ekweremadu of the Peoples Democratic Party (PDP).​

JUST IN: Okorocha storms out of National Assembly

Rochas Okorocha, former governor of Imo state, has been prevented from participating in the inauguration of the 9th national assembly.

After some minutes at Omolori’s office, he walked out of the national assembly.

Governor Kayode Fayemi of Ekiti State leads APC governors to the Senate chamber. Umar Ganduje of Kano State and other governors accompany him. 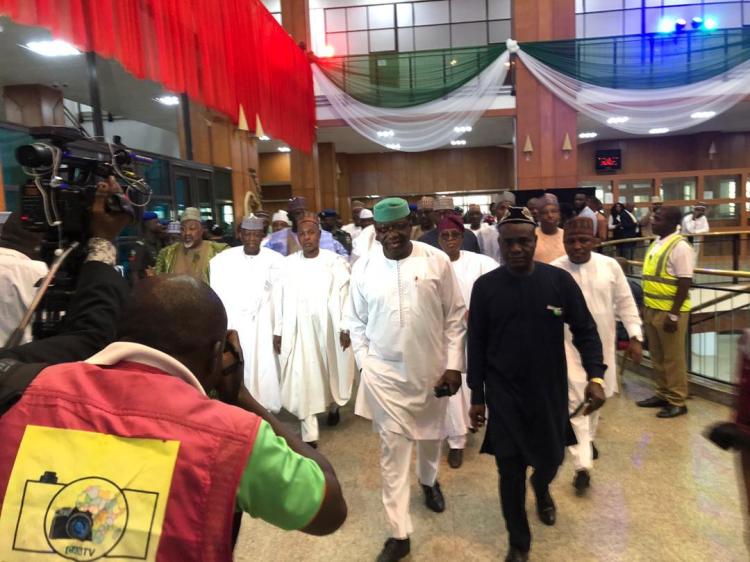 There was an uproar in the Senate, as the Clerk to the National Assembly (CNA), Mr Mohammed Sani-Omolori, declared the first session of the 9th Senate open, to elect the presiding officers.

Trouble started when the CNA announced that the elections would be held in accordance with the provisions of the rules of the Senate, contained in its Standing Orders 2015 (as amended).

An Abuja High Court had on Monday, issued an injunction, restraining the Clerk to the National Assembly from using the 2015 Standing Orders of the Senate. It further mandated the CNA to use the 2011 Standing Orders to conduct the election of the presiding officers.

However, the CNA, in responding to the agitations and questions being raised obviously by supporters of Ahmad Lawan, making reference to the court decision, said that he had not been served with the court injunction.

When the protesters persisted, Sani-Omolori reminded them that the only business of the day was to conduct the election in line with the provisions of the constitution, and the rules of the Senate.

He said that there was no provision for entertainment of questions, neither was there room for raising of point of order but however, noted that he only decided to honour them as by responding to their inquest into whether or not he received the said court injunction.

“You have no voice till after the election”, Clerk bluntly told the senators-elect.

He then mandated the Clerk of the Senate, Nelson Oniwoh to take the roll call, which he did.

At the end of the count, the CNA announced that 107 Senators out of 109 were present in the chamber. Results of two senatorial seats of Imo East and Imo North are still pending.

Thereafter, the CNA called for nominations of candidates for the office of the President of the Senate. Senator Yahaya Abdullahi (APC, Kebbi North) and seconded by Senator Solomon Adeola (APC, Lagos West).

Lawan was given time to address his colleagues, where he assured again, to run an inclusive administration and also ensure harmony between the Executive and the Legislature.

After his speech, Ndume was then nominated by a PDP senator from Adamawa and seconded by another one from Rivers State.

He was allowed time and he briefly addressed his colleagues, promising to make the office of the President of the Senate less attractive and also make the Senate be an institution of equal members, with the presiding officers applying the provisions of the law to lead.

Featured Posts
2023 Elections: Only A Candidate Who Isn’t Affiliated To Any Sect Can Solve Nigeria’s Problems – Accord Party Presidential candidate, Prof. Chris
17 mins ago