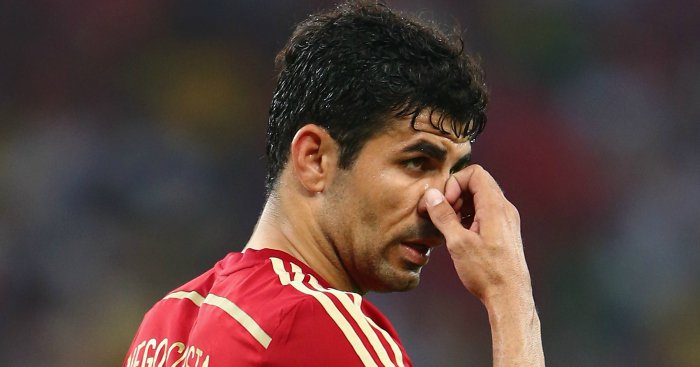 The career of the Brazil-born Spanish international could be coming to an end at the club.

The former Chelsea striker will not play again this season after being slapped with an eight-game ban for insulting the referee’s mother during the recent defeat to Barcelona.

The referee, Gil Manzano claimed that Costa twice said to him “I s*** on you w**** mother” with video evidence damning for the striker.

Spanish newspaper, AS reports that Costa faces internal action from Atletico for the sending off and that has led to him refusing to take part in training.

The Brazilian was at the club’s training ground on Thursday (today) but despite the club confirming he is not injured, he did not take part in the training session

Costa was handed the right-game ban for two separate offences – holding Manzano’s arm to prevent him booking his teammates and abusing the official.

The player’s long-term future at the club was unclear before the incident, with Diego Simeone preferring Alvaro Morata since his move from Chelsea.

The Spaniard is contracted until 2023 but he has only managed five goals this season and reports suggest his latest indiscretion could be the final straw for boss Diego Simeone.

Simeone’s patience with Costa has reportedly ran out, and he will listen to offers for him at the end of the season, with a move to China having been mooted.

He arrived at Stamford Bridge from Atletico and helped the Blues to two Premier League titles.

EPL: What Solskjaer said about De Gea after another blunder in Man United’s 2-0 defeat to City