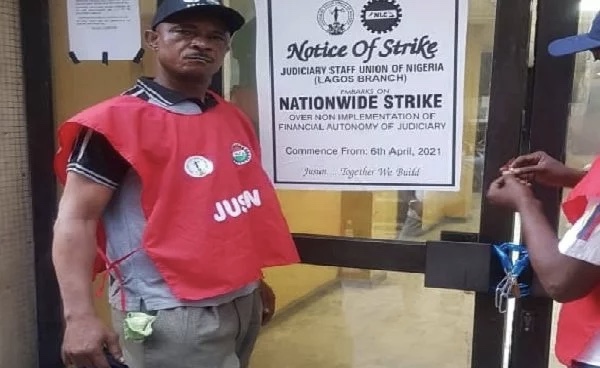 On Tuesday, the Federal Government will meet with the leadership of the Judiciary Staff Union of Nigeria (JUSUN) to discuss the ongoing strike (today).

According to NEWS DIRECT, the meeting between the government and JUSUN was convened at the request of Senator Chris Ngige, Minister of Labour and Employment, and is set to begin at 2 p.m.

The judicial staff, on the other hand, have announced that their seven-day strike will continue until the government meets their demands.

The union also stated that Ibrahim Tanko Mohammad, the Chief Justice of Nigeria (CJN), who met with them earlier to call off the strike, is unable to meet their demands.

Remember that JUSUN began a nationwide strike on Tuesday, April 6, when it ordered all of its members across the federation to close all courts following the expiration of a 21-day ultimatum issued earlier over the government’s failure to implement the judiciary’s financial autonomy.

The union is demanding that the judiciary have financial autonomy, particularly at the state level, where governors have purposefully denied the judiciary access to their fund, in violation of Section 121 subsection 3 of the 1999 Constitution.

“Our struggle and what we are fighting for, the implementation of financial autonomy for the judiciary, is in line with the constitution and other existing laws,” said Marwan Mustapha, President of JUSUN.