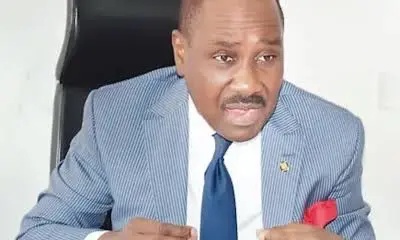 Williams Gogwim, a younger brother of the deceased confirmed his death to the News Agency of Nigeria (NAN) on Wednesday.

“My brother has been sick since last year and in December he left the country for treatment abroad and only returned on Sunday, April 4.

“He came back a little bit stronger, until this morning when he had health crisis, which compelled us to rush him to Rayfield Medical Centre.

”Unfortunately, on getting there he was confirmed dead,” he said.

“We are going to miss him, his love and warm as a brother, father, uncle and supporter,” he said.
Williams said that the family was shocked over his demise and would discuss the funeral soon.

Gogwim was elected as senator representing Plateau Central in 2007 and spent four years at the National Assembly before loosing to Sen. Joshua Dariye in 2011.

He retired as a Major in the Nigerian Army before joining politics and became a senator in 2007.

National Assembly Landlords: 10 lawmakers who should not get ticket to contest in 2023

#HarassBuhariOutOfLondon: Nigerians In London Plan To Protest On Wednesday