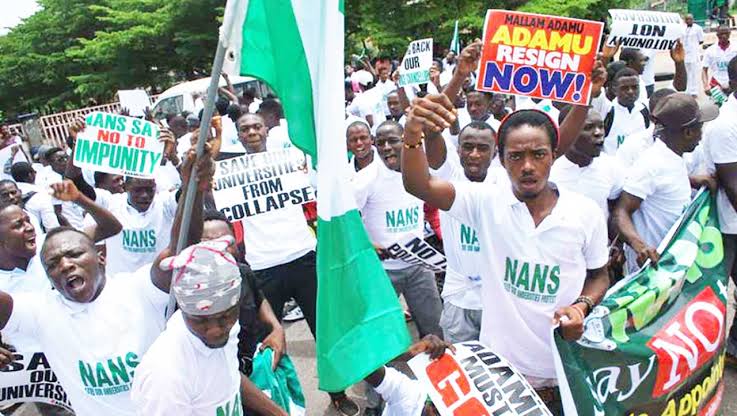 The Zone D chapter of the National Association of Nigerian Students (NANS) has demanded the reinstatement of all suspended student activists in various tertiary institutions in Southwest.

The students condemned fee hike and also called for the reinstatement of students’ union  activities in schools.

A CALL FOR URGENT INTERVENTION

In the words of Tafawa Balewa, “freedom of association is one foundation on which we build our free nations.” Unfortunately, in this part of the world, freedom of association, most especially as it relates to students’ unions on our campuses has suffered crude treatment and abuse from those at the helms of affairs who are meant to protect, safeguard and promote this fundamental rights of the students in making the country a better place while strengthening the country’s liberal democracy.

Harold Laski was right when he opined that “without freedom of mind and of association, a man has no means to self-protection in our social order.” This is not only true but clear in today’s society considering the manner in which students are being treated in institutions where there are no Students’ Union to fight, agitate, project and protect their rights.

As an association, we find it appalling that our ivory towers which are meant to be seen as incubator of knowledge that produces critical minds will not cease to suspend Students’ Union activities at the slightest provocation. It is important to state that there is no justification whatsoever for the suspension/proscription of Students’ Unions by the managements of our tertiary institutions, the moment this is done (which will basically prevent students from taking part in Union activities), their freedom of association is violated.

The right to freedom of association is recognised both in international laws and in all civilised countries of the world. The International Covenant on Economic, Social and Cultural Rights (ICESCR), the African Charter on Human and Peoples’ Rights and the International Covenant on Civil and Political Rights (ICCPR) Nigeria has ratified which recognises peoples’ right to freedom of association. And, because the aforementioned has been domesticated by the Nigerian government by incorporating it into the Nigerian law as stipulated in Section 40 of the Constitution of the Federal Republic of Nigeria, 1999 (as amended), it has become a part of the Nigerian corpus juris, and, accordingly, the Nigerian authority, without excluding University administrators is bound by these instruments.

It is based on the foregoing we demand;

* Immediate reinstatement of all expelled and rusticated students’ activists within the next 7 working days. Ifemosu Michael of Federal University of Agriculture, Abeokuta; Arotiba Olawale Affluence, Yusuf Nurudeen Alowonle of Lagos State University and Ojo Aderemi of University of Ibadan.

* An end to commercialisation of education and hike in school fees.

* Democratisation of the school system through the election of all the principal officers with elected representatives of the teaching, non-teaching staffs and students in all committees, council and all decision-making bodies.

* Free and independent students’ unionism without interference from the school authorities and the State. The right of all individuals to freely exist and operate on campuses in so far they do not make use of violence to achieve their objectives is inalienable. It is on this basis we demand for the immediate and unconditional reinstatement of Obafemi Awolowo University Students’ Union, Yaba College of Technology and University of Lagos Students’ Unions within the next 7 working days, and, failure to do this shall be met with stiff resistance.

We maintain that the suspension of the Students’ Unions by the University managements, is, ipso facto, a derogation from the students’ godly and Constitutionally recognised right to freedom of association and assembly which is a contravention and an assault on the provisions of Articles 9, 10 and 11 of the African Charter on Human and Peoples’ Rights (Ratification and Enforcement) Act, 1981, a Treaty-turned-Act which does not accommodate derogation in any form and, Section 40 of the Constitution of the Federal Republic of Nigeria, 1999 (as amended).

Also, we condemn the composition of Students’ Union Caretaker Committee as is being suggested by the management of Lagos State Polytechnic. It is public knowledge that the management has no business with how the affairs of the Students’ Union is run most especially when it has to do with transition, and, we call on the management to immediately back-down on this arbitrary use of power as it will constitute a flagrant violation of the fundamental rights of the students in a participatory democracy. The Caretaker Committee as is being planned by the Polytechnic management must immediately be decomposed so as to enable students to freely decide who run their affairs. We maintain that those who make peaceful resolution impossible, inadvertently make violent revolution inevitable.

* Adequate funding of education sector for the complete rehabilitation of the system through the provision of more and well-equipped hostels, cafeteria, libraries, laboratories, phone services in hostels and other strategic places. To succinctly put, all facilities required to meet the challenges of 21st century education amidst present pandemic and in preparation for unforeseen occurrences must be duly put in place.