Contradictory reactions have trailed the leaked viral video of alleged students of Nnamdi Azikiwe University having sex publicly at a party in a hotel in Awka, Anambra State capital.

The said video which has been trending on Twitter shows where people gathered in poolside of a hotel and were having hot sex, while others were watching and recording the live porns.

A social media user, @itz_daddyjoe, who leaked the video, also noted that the sex party held on Saturday September 3, at the Wintess Garden Hotel in Ifite Awka, Anambra State, which is one of the hotels located around UNIZIK main campus. He further alleged that persons seen in the sex romps video, in the full glare of all who stood to watch, were students of UNIZIK.

The video also shows several male and female partners as they were digging it hard with each other at the said sex party.

”It is very unfortunate that the school environment which most of us graduated from is turning into something else. I bet that’s why I couldn’t live in Ifite Awka during my University days. A sex party at Wintess Garden Hotel Ifite Unizik is condemnable…,” he wrote.

However, the Students’ Union Government (SUG) of UNIZIK has denied the allegation that the said persons in the video are students of UNIZIK.

In a Letter of Disclaimer jointly signed by Comr. Charles Ijeomah (the President) and Comr. J.N. Ogbonnaya (the Secretary) of the SUG, the Union dissociated the entire students of UNIZIK from the said immorality. They claimed that school is not in session and that students are at home. The Union absolved Unizik students of the immoral act allegedly committed at the Wintess Garden, claiming that the said part was not a students’ program.

The letter reads, “This is to inform the public that the students of Nnamdi Azikiwe University and the University have nothing to do with the event that happened on 3rd of September, 2022, at Wintess Garden, and in fact it is not a students program.

“In conclusion, “The Night Wear Party” is a personal business of some show promoters in Awka, and has nothing to do with the University or our students. We are known for moral decency, as we all study to be certified ‘in Character and in Learning.’” 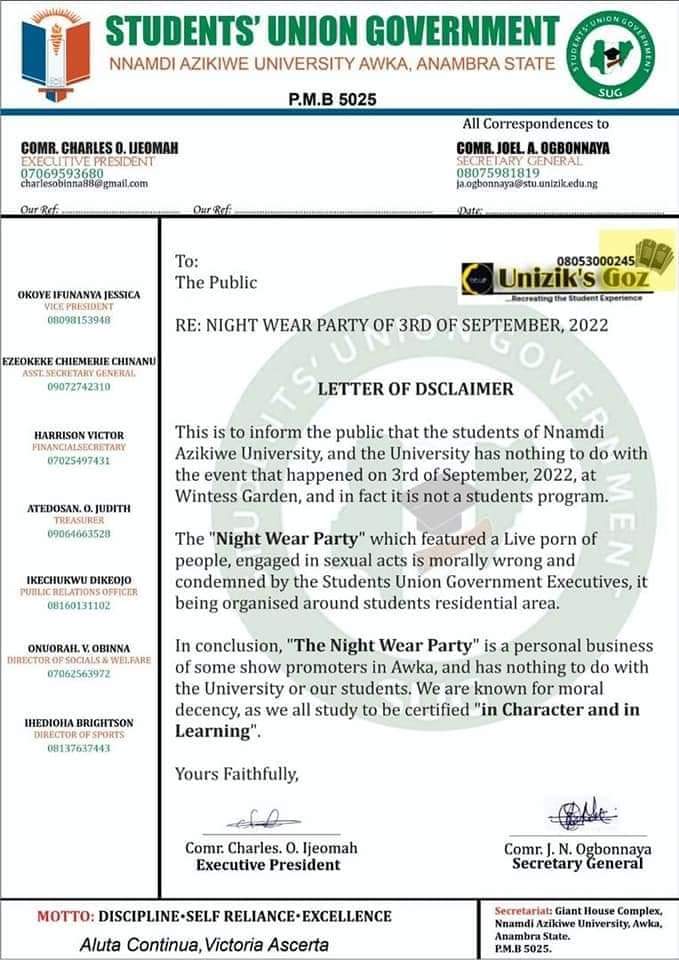 “We hereby use this medium to inform the general public that such an immoral act never happen in our hotel. This is only a concocted story by mischief makers to bring our name to the mud.

“Our Hotel is one of the best hotels in Awka and duly registered with the Ministry of Culture and Tourism, and we cannot condescend to the level of promoting and condoning open sexual acts and the likes.

“We therefore urge the general public and our numerous customers to disregard such rumours because it never happened at Wintess Garden Hotel & Suites Limited.” 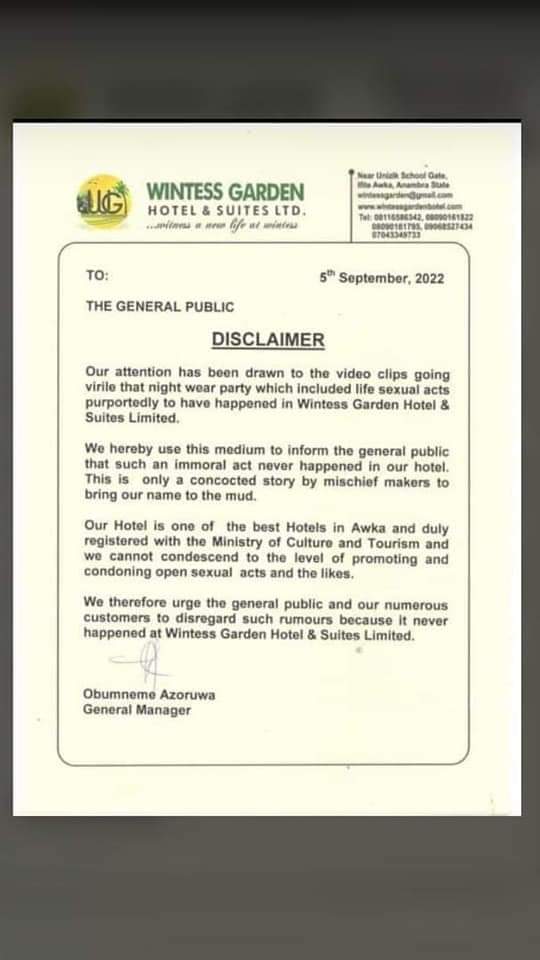 Featured Posts
2023: Talks Are Ongoing For Kwankwaso To Step Down For Atiku — Northern Leaders
42 mins ago