President Muhammadu Buhari has arrived Lagos where he will unveil five key projects in the state within the space of two days. 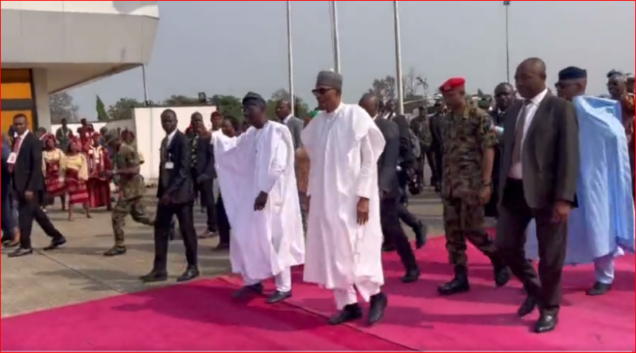 The president arrived the Presidential wing of the Murtala Muhammed International Airport around 3:45pm on Monday.

Buhari was received at the airport by Governor Babajide Sanwo-Olu of Lagos State. Also at the airport to receive him was the Ogun State Governor, Dapo Abiodun.

He later departed the airport through a Chopper to the Lekki Deep Seaport, which is one of the projects he will unveil while in Lagos.

In Lagos, Buhari will unveil the Lekki Deep Sea Port, the 32-metric tons per-hour Lagos Rice Mill, one of the largest in the world; the 18.75-kilometer 6-lane rigid-pavement Eleko Junction to Epe Expressway; the John Randle Centre for Yoruba Culture and History and the iconic Lagos Blue Line rail project.