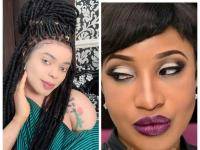 Nigeria’s first official transgender, Bob Risky is one of Nigeria’s personality who does not need to introduce herself anymore. She is a media celebrity with over four million followers on her social media handles.

Though may have never been seen in many places as she is basically not allowed in many occasions, yet an average Nigerian who uses social networks would easily point her out of many heads.

She has succeeded in winning people’s hearts with her countless giveaways.

As far as she is concerned, what matters to her is to get money and more money so as to buy more hearts. Doing giveaways has been one of her identities as fans are always seen begging for blessings (money) in her comment sections even when the post made is not a giveaway post.

Whereas, there have always been this Nigerian lady who would go miles, swim through tantrums and hates to bring out Bob from the double-edged verbal swords of Nigerians. It is Tonto Dikeh, the one and only Nigerian woman king.

She has always been a shoulder for Bob. Tonto’s friendship with her bestie Bob has made it to the level of Friendship Goal as they share a lot in common both in wealth, health and in affection.

When Bob posted Tonto on her Instagram handle, she wrote”My number 1 fan of all time… We were friends but now we are blood (sisters).

Tonto however replied her but in the course called her ‘My Gee’. This could have been a mistake or a subconscious action that slipped off her typing fingers.

Fans attacked her for calling Bob a Gee since ‘Gee’ has always been referred to men – a guy man.

When the first commenter asked why Tonto is now referring to her as a man, a die hard fan came in immediately and shunned him.

They died the case though. They refused to settle the matter but however, it is now obvious that at the back of every mind, Bobrisky remains a man. Or you still have reasons to say otherwise?

I Was Raped – BB Naija Star, Khafi Cries Out