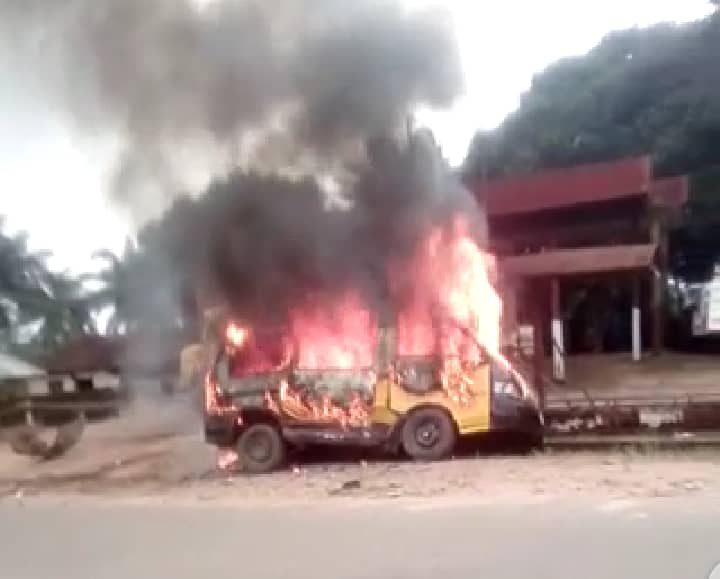 Persons suspected to be members of Indigenous People of Biafra (IPOB) set ablaze a bus while enforcing the sit-at-home order of the outlawed group, on Tuesday.

IPOB had declared sit at home in commemoration of the fourth anniversary of the alleged military invasion of Nnamdi Kanu’s home in Afaraukwu, Abia State.

Around 9.30am on Tuesday, members of the group attacked innocent persons along Nanka-Oko road in Anambra.

While the driver of the bus was lucky to escape, the miscreants set the bus and a tricycle ablaze.

Confirming the incident, the Police Public Relations Officer, DSP Ikenga Tochukwu, said the command received a distress call on Tuesday at about 9:30am on a case of Arson and malicious damage along Nanka/Oko road.

He said on receipt of the call, policemen on ground immediately monlised to scene and brought the situation under control.

According to him, normalcy has been restored in the area and people are going about their businesses.

Ikenga also said the command and other security agencies in the state have since intensified patrols and surveillance to stop further break of law and order.

According to him, preliminary investigation revealed that the attackers stopped the tricycle and the commercial bus, chased occupants away and set the vehicle and tricycle on fire.

He further said that no lost of life was lost.