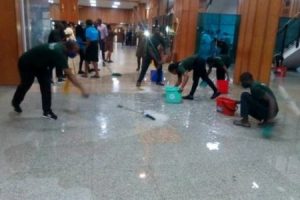 News Direct gathered that the roof covering the White House section of the National Assembly was leaking and the foyer leading to the two chambers of the Senate has been covered with water.

The sanitation workers of the NASS complex are currently scooping water and using vacuum machine to mop it up.

Ongoing plenary at the Senate was however, disrupted when the situation became worse.