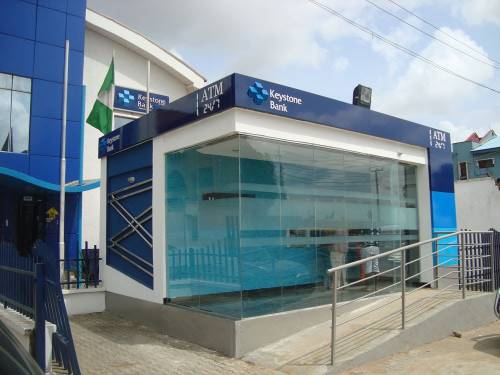 These are not the best of times for struggling Keystone bank as search light is beaming into the alleged fraudulent acquisition of the bank. To this end, customers are said to have begun vigilante on their deposit.

Following the controversy generated by the leading opposition party, the People’s Democratic party, PDP, over the alleged acquisition of the bank and Etisalat by late Alhaji Ismaila Isa Funtua and the CEO of AMCON, Ahmed Kuru, President Muhammadu Buhari has reportedly ordered probe into the alleged fraud.
A highly placed source at the headquarters of the Economic and financial crimes Commission, EFCC reported that the President was thoroughly embarrassed with the allegations linking him to the transactions.

According to the source, a discrete panel will be set up soon comprising of the Chairman of the EFCC, representative of the DSS, ICPC, federal ministry of Justice to look into the allegations.

The source further added that, both Isa Funtua, Ahmed Kuru, the governor of the central bank of Nigeria, CBN, Chief Godwin Emefiele and management Staff of the Keystone Bank and 9Mobile will be quizzed by the operatives of the EFCC for some interactions.

Recently, a mindboggling scandal broke out to public knowledge about how Keystone Bank and 9Mobile were acquired in controversial circumstances by the business interests of late Alhaji Isa Funtua, a close friend of President Muhammadu Buhari, via the instrumentality of Asset Management Corporation of Nigeria (AMCON).

The PDP challenged the federal government to come out clean on what could be a serious dent on its anti-corruption stance, there is indeed no smoke without fire.

The leading opposition party also confirmed fact that the son-in-law of Isa Funtua, Ahmed Kuru, is the current CEO of AMCON.

Before him, the previous CEO, Chike Obi, was a first-class gentleman and technocrat who was strangely removed from office before the expiration of his term and was replaced with Kuru, the son-in-law of Isa Funtua.

Before the sale of Keystone Bank to Isa Funtua, all bad debts in the books of the Bank were taken over by AMCON. So, it was a clean Bank with all the Assets and no Liabilities that was sold to the Buyers.

The Executive Management of AMCON was coerced into approving the transaction and those who were willing to submit a much higher bid were disqualified under a most opaque, suspicious process that lacks all transparency. The process was just manipulated in favour of the father-in-law of the AMCON CEO.

The Corrupt Payment for Keystone Bank The most disgusting part of the entire sale of Keystone Bank is how the 25 Billion Naira sales price was paid to AMCON.

When the Funtua Group took over Keystone Bank, they went borrowing immediately at the Interbank Market for 20 Billion Naira to refund AMCON’s funds. This has left a hole in Keystone Bank’s Balance Sheet and makes the Bank one of the most undercapitalized Banks in the Country as at today. The evidence of this highly compromised acquisition process can be obtained from the current and former staff of AMCON, from NDIC, CBN and from the current staff of Keystone Bank itself.

Another suspicious acquisition scandal surrounding the Funtua Group is about the untidy way 9-Mobile, formerly known as Etisalat, was bought. It is Mr. Adrian Wood of Teleology Holdings, a very sound telecoms professional, who collaborated with the Funtua Group for the acquisition of 9-Mobile.

The problem with their bid was the lack of a qualified Operator to support the bid which was one of the minimum conditions of NCC. Adrian Wood alone was not a substitute for an Operator.

The Nigerian Communications Commission (NCC) gave several conditions that must be met by the Ultimate Buyer of 9-Mobile to ensure the protection of shareholders value, prevent loss of jobs, protect the telecoms industry from slipping into a crisis and ensure transparency and professionalism in the post-acquisition entity.
The conditions listed by NCC that must be met by the Buyer are Strong Telecoms Operating Experience, Strong Financial Capabilities, Strong Technical Knowledge and Strong Administrative Skills.
The first thing that happened once Teleology was announced as the preferred winner was that the Funtua Group edged Adrian Woods out of Management and turned him to an Insignificant Shareholder.

The second development was that the Funtua Group raided Keystone Bank again and forced the Bank to Pay 50 million Dollars as down payment for the acquisition of 9-Mobile.

The third issue was that Teleology Nigeria replaced Teleology Holdings to remove any influence of Adrian Woods from 9-Mobile totally. The fourth step taken the Funtua Group was to borrow 260 Million Dollars from African Exim Bank.

The fifth thing was to coerce NCC to approve the sale at all cost without meeting 90% of the conditions set up ab-initio by the NCC.

The sixth strange action of the Funtua Group was to force the board of NCC to approve the sale through the influence and pressure from the Presidency. And the seventh Funtua infraction was to use the influence of CBN to force the Banks to the table and waive their own conditions of sale of 9-Mobile to the Teleology Nigeria group.

Efforts to reach the acting Head media and publicity of Economic and financial crimes Commission,EFCC, Mr. Tony Orilade to confirmed the latest developments proved abortive as his lines were not
-daybreak