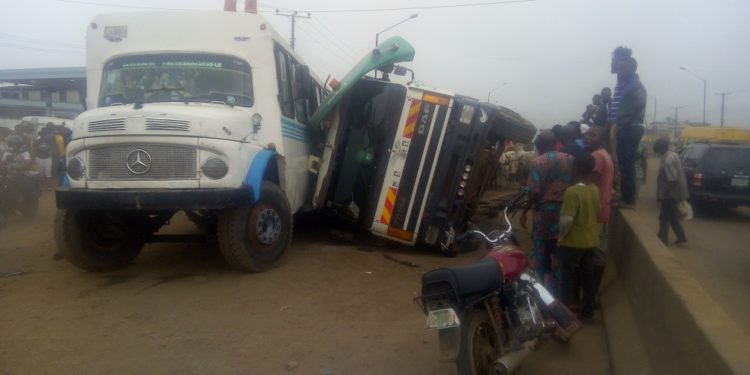 The bus was heading to Oshodi area of Lagos State, while the Lorry to Abatior when the accident happened.

The Nation gathered that the drivers of both vehicles were trying to avoid a deep pothole on Mosolashi bus stop when the accident happened, leaving the area littered and in traffic for some hours.

The lorry carrying the cows was said to have partially hit the commercial bus when it entered the pot hole but fell on its other side while trying to move out of the pothole to prevent further pressing on the bus.

A security official said the accident happened around 6:30 am.

He said the truck carried cows from Shaki in Oyo State and was heading to Abatior in Ogun state.

“There is a big pot hole here in Mosolashi bus stop. The lorry carrying the cows first partially hit the bus breaking some of its glass, all the passengers ran out of the bus and there was no loss of life. It was while the lorry driver was trying to prevent further falling on the bus and was trying to move out of the pot hole that it fell and 16 of the cows died on the spot. The lorry driver fled the scene and was nowhere to be found.”

He said the people from Abatior came to pack the remaining cows that were alive, saying the dead ones were dashed out.

The owner of the lorry, Sulaimon Olarenwaju, said the 16 cows that died is worth over N5m.

“The lorry is mine, it was coming from Shaki in Oyo State where the cows were loaded and was heading to Abatior in Lagos where the buyers had already paid for the cows. Mine was to collect the money for transportation but as it is now, I don’t know if I will be paid.”

He said the cows belong to those in Abatior, adding they came to the scene to carry the remaining cows alive.

He lamented as of press time that the police who towed his Lorry to the Alagnado station was yet to release it to him, saying he does not know what to do.

“It was not as if the Lorry driver intentionally caused the accident, the pothole caused it, I dont know why my Lorry is not released, they should please release my lorry and not ask me to pay for it.”

An eye witness said the lorry hit the passenger bus and fell while they were both trying to prevent deep potholes in the area.

He said the passenger bus was safe, noting that nobody died and nobody was injured.