A nursing mother and her baby have allegedly been detained in a hospital for 7 months since she gave birth, due to her inability to pay her hospital bills.

She had lost consciousness on March 6 while she was 7 months pregnant and was taken to the hospital where she registered for antenatal care. However, due to lack of adequate equipment, she was transferred to Mojol Hospital.

She was operated on and delivered safely but when she was unable to pay her bills, she was detained. She was also asked to vacate the bed in the hospital for other patients. Blessing and her baby have been sleeping on the floor of one of the wards of Mojol Hospital for months.

It is alleged that Blessing, a hairdresser, had pleaded with the hospital management to allow her leave the hospital and return to work so she can earn enough to pay back but they refused.

She is also allegedly not allowed to leave the hospital premises to buy anything for herself and the baby except one of the nurses helps her out. 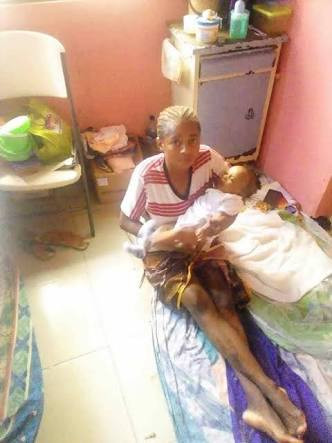 She explained that Blessing gave birth in March through Caesarean section at Mojo hospital at Egbeda shasha in Lagos. She was charged N350,000 Naira and later the medical director reduced it to N250,000.

She was able to pay N160,000 but still owes N90,000, Mrs Ogeu said. As a result, the hospital allegedly refused to discharge her until she pays what she owes.

Mrs Ogwu said after the case was reported to Esther Child Rights Foundation, the foundation reported to the Afonka Police station and they assigned an officer to the case but there has not been any positive result since then.

From the hospital, Blessing, from Cross River State, called out to Nigerians for help. She said efforts by her husband – a mechanic – to raise the money had been futile.

A spokesperson for the hospital said they have been unwilling to release Blessing due to past experiences with other patients. The spokesperson said patients owing the hospital money beg to be released with a promise to pay later, but they never show up again.

Featured Posts
2023 Elections: Only A Candidate Who Isn’t Affiliated To Any Sect Can Solve Nigeria’s Problems – Accord Party Presidential candidate, Prof. Chris
11 mins ago