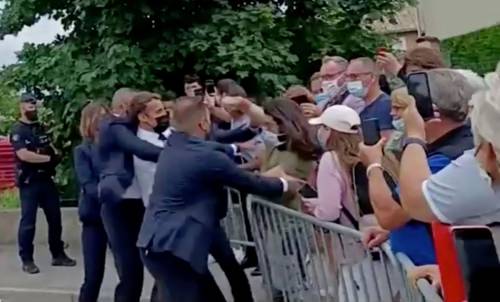 For slapping President Emmanuel Macron in the face, a 28-year-old Frenchman who defined himself as a right-wing or extreme-right “patriot” was sentenced to four months in prison on Thursday.

Damien Tarel was also barred from ever holding public office in France and from possessing firearms for five years as a result of the swipe, which touched Macron’s left cheek with an audible thwack as the French leader was greeting a crowd, according to NPR.

Tarel testified at the trial on Thursday that the attack was impulsive and unplanned, and that it was motivated by rage over France’s “decline.”

As a judge in the southeastern city of Valence condemned him on a charge of violence against a person with public power, he sat straight and showed no emotion. He was given a four-month prison sentence as well as a 14-month suspended term. His girlfriend sobbed uncontrollably.

Tarel described himself as a right-wing or extreme-right “patriot” and member of the yellow vest economic protest movement that shook Macron’s presidency in 2018 and 2019. He screamed a centuries-old royalist war cry as he hit the president.

He stood poised and composed as he forcefully defended his actions and his opinions on Macron, without elaborating on the policies he wants France to adopt.

Tarel admitted to slapping the president in the face with a “very forceful” slap. “I felt disgusted and had a visceral response when I saw his friendly, deceptive look,” he told the court. “It was a spur-of-the-moment reaction… The savagery surprised me as well.”

He admitted that he and his companions discussed bringing an egg or a cream pie to hurl at the president, but that they decided against it — and that the slap wasn’t planned.

“I believe Emmanuel Macron reflects our country’s deterioration,” he remarked, without clarifying what he meant.

According to the prosecutor’s office, he told investigators that he harbored right- or ultra-right political convictions without being a member of any party or group.

The slap drew attention to a slew of ultra-right groups brewing underneath France’s political surface, which, despite their small numbers, are becoming increasingly threatening.

Macron refused to comment on the trial on Thursday, but he did say that “nothing ever justifies violence in a democratic society.”

“Getting slapped when you go forward a crowd to say hello to those folks who have been waiting for a long time isn’t such a huge thing,” he stated in an interview with broadcaster BFM-TV. “We must not exaggerate the significance of that rash and aggressive deed.”

“We must not make it banal,” the president stressed, “since anybody with public authority is entitled to respect.”

Another man caught in the commotion that followed the slap, Arthur C., will be tried for illegal weapon possession in 2022, according to the prosecutor.

Police searching Arthur C.’s residence found literature on the art of war, a copy of Adolf Hitler’s manifesto “Mein Kampf,” and two flags, one representing Communists and the other representing the Russian revolution, according to the prosecutor’s office.

According to the prosecutor, neither Tarel nor Arthur C., both 28 years old, had any police history.

While most crimes in France require months or years to be prosecuted, authorities in this case employed an unique emergency procedure to hold a trial just two days after the slap. Tarel was unconcerned about the process.

During a quick meet-and-greet with members of the public, who were kept back behind road barriers in the winemaking town of Tain-l’Hermitage, videos showed Macron’s attacker hitting the French leader’s left cheek and his bodyguards moving the man away.

“Montjoie! Saint Denis!” said the attacker, followed by “A bas la Macronie,” or “Down with Macron,” a centuries-old royalist war cry.