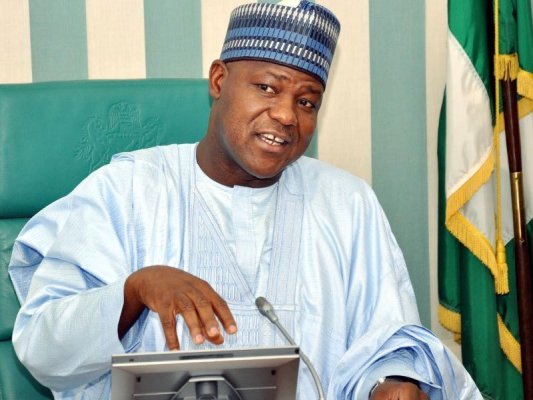 It is now clear that Independent National Electoral Commission (INEC) is working in concert with Governor Mohammed Abdullahi Abubakar to rob Bauchi people of their mandate, Speaker of the House of Representatives, Hon Yakubu Dogara, has disclosed.

The speaker said in a press statement that emerging facts show that Bauchi Resident Electoral Commissioner (REC) Ibrahim Abdullahi, is working in tandem with the embattled governor of Bauchi State, Mohammed Abdullahi Abubakar, to use all available means to tilt the governorship election results in favour of the incumbent governor.

Hon Dogara therefore called on the international community including the International Criminal Court, governments of United States of America, United Kingdom and the European Union to hold the Nigerian government and the security agencies responsible if any life is lost before, during and after the re-run polls.

One method that has been deployed for this, he disclosed, is the use of the military to intimidate people during the polls and to rig elections in favour of the APC.

Hon Dogara also added that the plot to conduct a supplementary election was conceived by the REC, who is in cohort with the governor, to provide an avenue for votes to be rigged to increase the number of votes that governor garnered in the previous election, thereby increasing his chances of winning an election he has already lost.

He went further to highlight facts that clearly show that the Bauchi REC is working against the will of the people, citing examples of intentional delays in announcing results and tinkering with election procedures in order to favour the APC.

The speaker added that in “deliberately delaying the collation of Tafawa Balewa votes by Bauchi Resident Electoral Commissioner (REC), Ibrahim Abdullahi, in anticipation of an ex-parte order which was obeyed even before it was enrolled and served on INEC National Chairman in Abuja” and hastily saying he will obey the order that was not served on him, the REC has shown bias in favour of the Bauchi governor.

Hon Dogara continued, “The world must also note that the enemies of Bauchi people have stalled the collation of Tafawa Balewa votes to allow Governor MA Abubakar the opportunity through the illegal Saturday’s supplementary elections to fraudulently raise enough votes to cover the margin between him and Senator Bala Mohammed. If he succeeds in this on Saturday- Godforbid-then by Monday the world will be told that the ex-parte order granted by the Federal High Court Abuja has been vacated to enable collation of Tafawa Balewa votes which will now pave way for Governor MA to be declared winner with whatever margin he makes from the supplementary elections.

“If, on the other hand, Gov MA Abubakar is unable to exceed the margin of lead from the votes he may fraudulently allocate to himself from the supplementary elections, then Tafawa Balewa votes will be hotly contested so that he can have another opportunity of rigging his way back to power having been overwhelmingly rejected by the people of Bauchi state.

“So, Bauchi people and, indeed, the world should know that the chief facilitator of this evil plot is no other person than the Bauchi REC Ibrahim Abdullahi in collaboration with rogue elements within the security services.

“We also have it on good authority that security personnel have been deployed to all the affected Polling Units with the specific instruction to rig the election for Governor MA Abubakar even if people will be killed.”

He added that other facts that prove his assertion include, “Total disregard of the INEC chairman’s directives by Bauchi REC to release details of total PVCs issued and collected in respect of the 29 Registration Areas and 36 Polling Units where cancellation of votes took place and supplementary elections is supposed to hold in Bauchi state on Saturday. Our political party wrote to him twice and yet he refused to release the details of total number of PVCs collected. Therefore, the only reason to explain this is that massive fraud is being orchestrated by the REC.

“The declaration by Bauchi REC that he will proceed with supplementary elections in some units where elections were cancelled when the main elections is yet to be concluded in Bauchi state in contravention of the provisions of Section 26 (4) and 53 (4) of the Electoral Act and paragraphs 33(a) & (e), 34 (e) of the Regulations and Guidelines for the conduct of elections issued by INEC and sections 26 and 53 of the Electoral Act. As long as collation of Tafawa Balewa votes remains outstanding by virtue of the court order, the governorship elections in Bauchi state have not been concluded and therefore there ought not to have supplementary elections until collation of Tafawa Balewa votes is completed and the margin of lead between the candidates is determined according to law.

“Bauchi REC should tell the World whether INEC can order a rerun elections in units where elections were cancelled as a result of over-voting as against those where there were hitches. Cancellation due to over-voting is supposed to be punitive and such units should never be rewarded with the opportunity for supplementary elections as doing so is akin to allowing a student caught cheating in an exams to rewrite the exams. The world should know that almost all the units where supplementary elections are ordered by Bauchi REC were cancelled due to over-voting except in only one where election were canceled as a result of violence.”

Furthermore, Hon Dogara revealed that for the REC, the whole exercise may be an avenue to settle old scores as “we have it on good authority that when the Bauchi REC Ibrahim Abdullahi had problems with his former employers he sought the intervention of Senator Bala Mohammed (then FCT minister) to take up the matter with the President which didn’t yield any outcome, and that he has openly boasted to his confidants that he will do whatever it is within his power not to return Senator Bala Mohammed as Governor-elect. The world should ask whether his personal squabbles with Sen Bala Mohammed is enough for him to rob Bauchi people of the mandate they have freely given to Senator Bala Mohammed.”

While wishing all Bauchi people goodluck in the forthcoming supplementary elections and praying that God continues to frustrate the machinations of evil people who want to subvert the peoples’ mandate, he declared, “The world must also know that Bauchi election is already won and lost. The winner is Senator Bala A. Mohammed (Kauran Bauchi) while the loser is Governor M A Abubakar.”