Earlier today, there were some media reports that the special assistant to the president on media, Femi Adesina was the brain behind the continuous SARS protest going on in the country as he masterminded the stoppage of the president’s announcement that the Special Anti Robbery Squad had been disbanded. 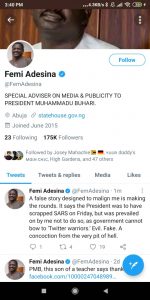 According to statements as seen on a Nigerian media platform, the People’s Gazzette, they opined that after the president’s meeting with the IGP and the vice president, Yemi Osinbaji, the president had given the order to go ahead and make the announcement that SARS has been disbanded but Adesina stopped the process and instead, said it would be seen as a weakness on the part of the presidency, that they would bow to twitter warriors. 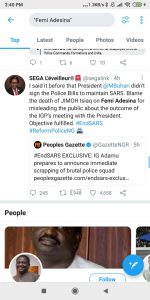 Adesina however has come out to deny the allegations and called it fake news.

He also said it was a concoction from the pit of hell.

As of this morning, the IGP has announced the disbandment of the SARS unit.