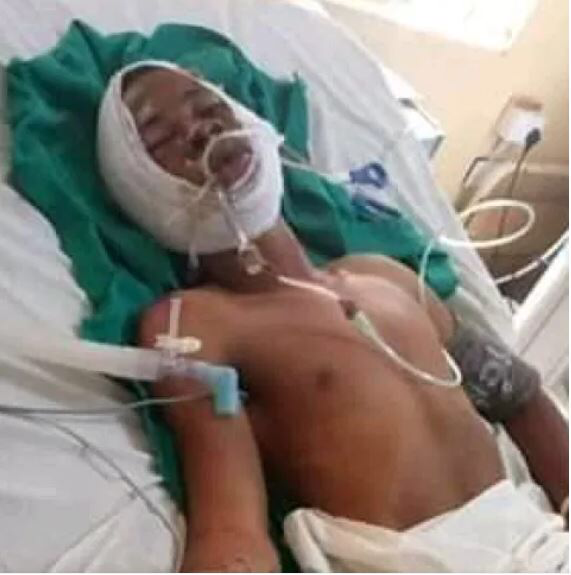 According to PREMIUM TIMES, the family of Ayomide Taiwo who was killed by police has been left distraught after his corpse was seized.

The family is still looking for money to pay a mortuary which has seized the corpse of the 20-year-old man killed by a police officer in August.

PREMIUM TIMES in September reported how Mr Taiwo was attacked by some police officers over a N50 bribe.

Mr Taiwo met his sad fate at Iragbiji in Boripe Local Government Area of Osun State on August 3, while returning to his base in Owena, Ondo State, after celebrating the Islamic festival, Eid-el-Kabir, with his mother, Yemisi Taiwo.

Four police officers had accosted the deceased at a checkpoint in Ere junction in Obokun and allegedly demanded a bribe. In the course of an argument over the bribe, a drunken police inspector, Ago Egharevba, hit Mr Taiwo with the butt of his rifle.

The young apprentice slumped and was rushed to Ladoke Akintola University of Technology (LAUTECH) teaching hospital in Osogbo. He spent six days in a coma at the intensive care unit of the hospital, but died on August 9.

His family told PREMIUM TIMES that they sold their farms and even borrowed money in their futile fight to save Mr Taiwo’s life.

The Commissioner of Police in Osun, Undie Adie, recommended the dismissal of Mr Egharevbe, the officer who attacked Mr Taiwo, to the Inspector-General of Police, but the police have since taken no further action.

The police spokesperson in the state, Yemisi Opalola, refused to comment on whether the police plan to pay compensation to the family and whether Mr Egharevbe has been sanctioned.

The family said the police did not assist it in its efforts to settle the hospital bills and accused the police of inhumane acts.

“After Ayomide was confirmed dead, we were given another bill of N79,000 to pay at LAUTECH to claim the body. Unfortunately, the money I had alongside my mum that day was just N11,000,”Adebayo, a younger brother of the deceased told PREMIUM TIMES.

“I called the police DPO to inform him but he shouted at me on the phone that we should ‘dump’ him (the corpse) in the mortuary.”

On Tuesday, Mr Adebayo told this newspaper that his brother’s remains were still at the LAUTECH mortuary and their mother had become sick over the development.

He called for the assistance of members of the public to recover the body from the mortuary.

“It has been there since August because we are unable to pay the debt the hospital claimed we incurred when they were treating him and the more it stays in the hospital, the higher our debt,”he lamented.

“Our mother has become terribly sick due to the delay. She can now hardly go out as life has become miserable for us,” he said.

When this reporter contacted the Chief Medical Director of LAUTECH teaching hospital, Babatunde Olaitan, he said he was not aware of the specific case of Mr Taiwo, saying there are many such cases at the hospital.

Nigeria police officers routinely violate the human rights of citizens, despite warnings from the IGP and the presidency. This led to the #EndSARS protests that swept across Nigeria in October.

“Extra-judicial killing is an aberration under the Nigerian constitutional jurisprudence. Section 33 of the 1999 Constitution guarantees the right to life of every human and taking it away in such an agonising manner is the highest encroachment on human rights,” a human rights activist, Festus Ogun, said.

Although many state governments have set up judicial panels of inquiry to look into cases of police brutality, the federal government is clamping down on the promoters of the protests by freezing their accounts, seizing their international passports and arresting some of them.