The Nation newspaper owned by the national leader of the All Progressives Congress (APC) has asked President Muhammadu Buhari to sack Isa Pantami, minister of communication for his past relationship with terrorists.

The newspaper in its editorial said Mr Pantami is not expected to remain in the cabinet. 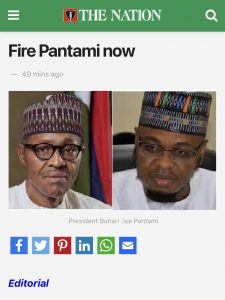 “The allegations against him are incredible, damning and incurably damaging. It is simply incredulous that a man who is not just a member of the country’s highest decision making organ, the Federal Executive Council (FEC), but also heads one of the country’s most critical and sensitive ministries could allegedly have sympathies for notorious terrorist groups and their nefarious agenda.

Trouble began for Dr. Isa Pantami, Minister of Communications and Digital Economy, when a local news outlet reported that the minister had been placed on a United States watchlist for his alleged links to terrorism. The minister’s first reaction was to deny the allegation and threaten to sue the newspaper and any other medium that published the story, while also demanding a retraction and apology”, part of the editorial read.

“But how genuine is Dr. Pantami’s purported repentance? If he was truly penitent, why did he initially seek to bluff his way through by issuing threats of court action against mediums that published the allegations against him? Should he not have come clean right away, admit his guilt and seek forgiveness and another chance, especially now that he blames immaturity for his past indiscretions?

“The reality is that no one can have access into the inner recesses of Dr. Pantami’s mind. When he claims that his views have since evolved and he is now a more mature and different person, we can only take him at his word. But then, there is also the strong possibility that the minister, confronted with undeniable evidence of his indefensible past utterances, is now sounding apologetic to keep his job in the face of mounting public pressure that he be removed from office because he constitutes a serious threat to national security.

“There is no doubt that the Pantami case also exposes a serious shortcoming on the part of the media, which also has a responsibility to thoroughly investigate the background of nominees to high office and duly publish their findings. Perhaps if he were a private citizen, Pantami’s apology would have been appropriate and sufficient. But he is a public officer who holds a ministerial portfolio critical to Nigeria’s security. Thus, an apology is clearly inadequate here. Pantami’s blaming critics of the ongoing National Identification Number (NIN) being undertaken by his ministry as being responsible for his current travails is childish and diversionary. He must take the path of honour and resign now. President Muhammadu Buhari ought to give him that option or fire him forthwith in the national interest,” TheNation newspaper read.

In another editorial, the Punch newspaper said the case presented with another opportunity to rise to the stature of a statesman, the President, Major-General Muhammadu Buhari (retd.), instead sank deeper into his familiar swamp of sectarianism and divisiveness. 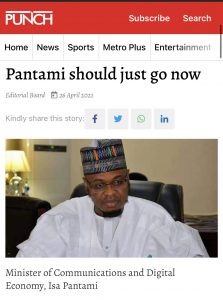 “This may lead to a significant loss of trust in his regime. And a decline in trust can lead to lower morale of troops, whose lives are on the line in the war on Islamist terrorism.

“By rising in stout defence of and retaining the Minister of Communications and Digital Economy, Isa Pantami, who has been uncovered as holder of religious extremist views and supporter of terrorist groups and jihadists, the regime ossifies its polarising reputation, insensitivity and parochialism and sabotages its own war on terror.

“It demonstrates a signal lack of awareness of the demands and nuances of democracy, responsible and responsive governance and particularly of the deep divisions currently tearing the country apart.

Yet, this was a straightforward case with an expected outcome of exit from the cabinet from any but an arrogant, clueless regime. Trust and confidence in government are important for the capacity of a society to organise an effective collective response to national security challenges,” the Punch newspaper read.

I Sold Corn And Fuel While Growing Up – Mercy Eke