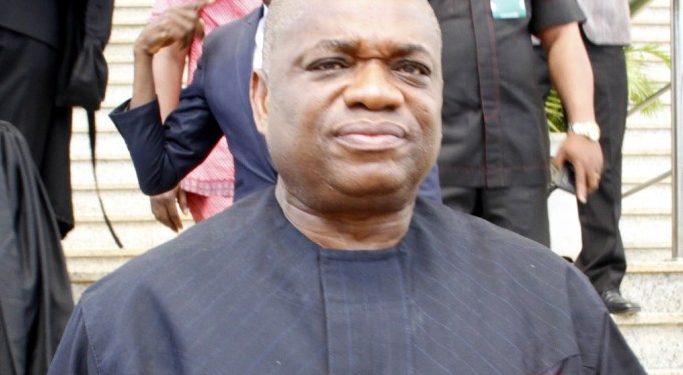 Facts have emerged that Orji Uzor Kalu, who the Supreme Court ordered his retrial on Friday over a N7.1 billion fraud while he was Governor of Abia State, actually requested for Justice Mohammed Idris to conclude his case despirte having been elevated to the Court of Appeal.

However, after he was sentenced to 12 years imprisonment over the alleged fraud, the eminent businessman and Chief Whip of the Senate approached the Supreme Court arguing that Justice Idris lacks jurisdiction over the matter since he has been promoted to the Court of Appeal.

This fact was contained in a letter written by his Counsel, Gordy Uche (SAN), dated June 26, 2018 to the then President of the Court of Appeal, Zainab Bulkachuwa, asking that Idris should be allowed to conclude with the case despite his promotion to the Court of Appeal.

Kalu, in the letter to Bulkachuwa, said in part: “We are therefore constrained to humbly request that Hon. Justice M.B Idris JCA, be allowed to conclude the trial of this part heard corruption trial at the Federal High Court, Lagos. Our application is hinged on the provisions pf Section 396 (7) of the Administration of Criminal Justice, Act 2015 which provides that:

“Notwithstanding the provision of any other law to the contrary, a judge of the High Court who has been elevated to the Court of Appeal shall have dispensation to continue to sit as a High Court Judge only for the purpose of concluding any partly heard criminal matter pending before him at the time of his elevation and shall conclude the same within a reasonable time.

“Provided that this subsection shall not prevent him from assuming duty as a Justice of the Court of Appeal.

“We do sincerely appreciate inconveniences that may have be associated with the grant of our application, both to the Lordship, Hon. Justice M.B Idris and to the Court of Appeal, but in the rather peculiar circumstances of our case, re-starting this criminal trial de novo will work untold hardship to all the Defendants including the prosecution.”

The letter, which was stamped received by Bulkachuwa’s office on June 26, 2018, was copied to the Chief Judge of the Federal High Court and Rotimi Jacobs (SAN), who prosecuted the case on behalf of the EFCC.

At the conclusion of the trial of Kalu last year, Bulkachuwa attributed the credit to the provisions of the Administration of Criminal Justice, 2015, which allows judges elevated to the Court of Appeal to return to the High Court to conclude their part-heard criminal cases pending in their court before their elevation.

However, the Supreme Court faulted this approval, which formed the basis for the call for the retrial of the case against Kalu.

Justice Amina Augie, who led a seven-man panel of Justices, held that the trial Judge acted without jurisdiction.

The judgment said: “Idris was no longer a judge of the Federal High Court as at the time he sat and delivered the judgement that convicted the defendants for allegedly stealing about N7.1 billion from Abia state treasury, his firm, Slok Nigeria Limited and former Director of Finance in Abia State, Jones Udeogu.

“Justice Idris, having been elevated to the Court of Appeal before then, lacked the powers to return to sit as a High Court Judge