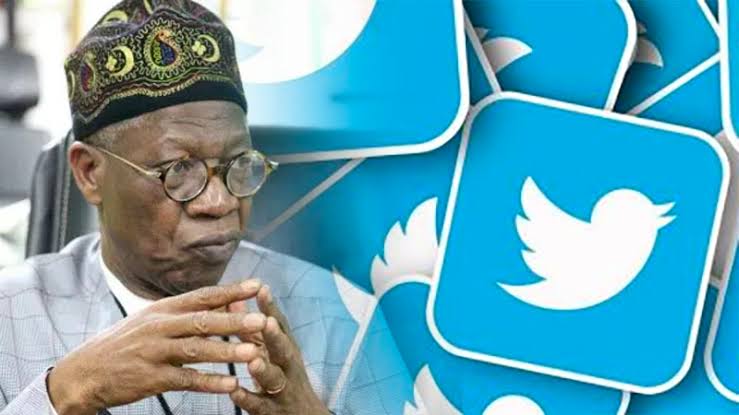 The Federal Government’s continuing ban on Twitter in Nigeria has been attributed to the President’s ego, Major-General Muhammadu Buhari (retd. ), and the Minister of Information and Culture, Lai Mohammed’s lies, according to civil groups.

Enough is Enough Nigeria, Paradigm Initiative, Media Rights Agenda, and Socio-Economic Rights and Accountability declared this at a press conference in Lagos on Monday to mark 100 days since Twitter’s ban went into effect.

The Executive Director of PIN, Gbenga Sesan, said, “Although the government said it banned Twitter because it was being used by warmongers to destabilise the country, critics condemned the ban, saying it is one of the attempts by the Buhari-led administration to gag the civic space.

“The ban was about the ego of the President and the lies of Lai Mohammed. The present administration, having failed in doing its job of arresting criminals and terrorists who use social media, decided to stifle the entire population and make Nigerians suffer for it.

“According to NetBlocks, Nigeria has lost about $250,000 every hour since the Twitter ban, a figure arrived at using the Brookings Institution method.”

According to the groups, Nigeria has lost at least $360m in the 100 days that Twitter has been banned.

They lamented that the ban has taken a toll on Nigerians, especially those making their livelihood on the internet, and restricted access to information for Nigerians.

The Executive Director of EiE, Yemi Adamolekun, said, “It is a disservice to the government because government agencies like the Nigeria Centre for Disease Control were able to give COVID-19 updates and keep citizens aware, but it is no longer able to do so effectively due to the ban.

“We have issues like unemployment, insecurity, poverty, and absence of a sense of belonging, the government neglected their concerns and moved to ban Twitter.

“If the government of Nigeria wanted to ban Twitter, they could have done it legally, but there is no document, either a legal document or court order backing their action. This is a gross violation of human rights and we must hold the government accountable.”

According to director of Programmes at MRA, Ayode Longe, as soon as the Twitter ban came into effect, civil groups jointly condemned the action, and called on the federal government to rescind the decision.

He said that in response to the ban, SERAP led 176 concerned Nigerians to file the first lawsuit at the ECOWAS Community Court of Justice against the government over the decision.

Longe said, “Following the suit, the ECOWAS Court on June 22, 2021, issued an order restraining the Buhari administration from prosecuting or harassing any Nigerian for using Twitter or any other social media platform in the light of the threat by the Minister of Justice and Attorney-General of the Federation, Mr Abubakar Malami (SAN), that anyone using Twitter despite the suspension would be prosecuted.”

He added that EiE Nigeria also filed a N5bn claim at the Federal High Court in Lagos against four mobile telecommunications operators in Nigeria over their blocking of access to Twitter.

Longe added, “Despite the legal actions, the Nigerian government has stuck to its guns in continuing the ban. Lai Mohammed said the government would ‘soon reverse the ban’ as meetings have been held with Twitter and some demands made by the government.

“According to Mohammed, the government demands included setting up an office in Nigeria in line with Nigeria’s Companies and Allied Matters Act, and registering with the Corporate Affairs Commission, among others.”

Mohammed had recently said that the FG would soon lift the ban.

Recall that the FG had on June 4 suspended Twitter after it deleted a tweet by the President, Major-General Muhammadu Buhari (retd.).