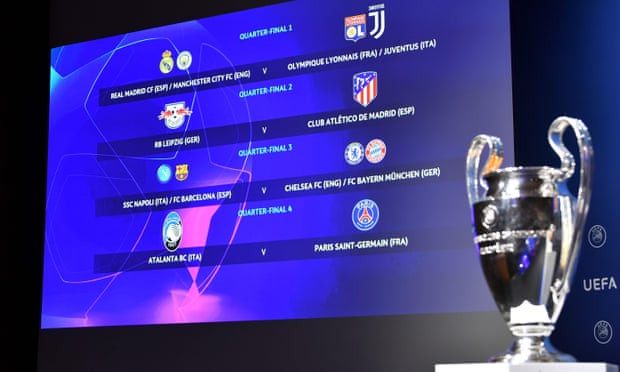 The Champions League is set to resume after the last 16 round was suspended due to the Coronavirus pandemic.

There are four remaining last 16 ties to finalize, which are Manchester City vs Real Madrid, Bayern Munich vs Chelsea, Barcelona vs Napoli, and Juventus vs Lyon. While Paris Saint-Germain, Atletico Madrid, RB Leipzig, and Atalanta have already booked their place in the last eight ties.

Manchester City will take on  Cristiano Ronaldo’s Juventus or French side Lyon if they make it past Real Madrid. While Lionel Messi’s Barcelona will take on Bayern Munich or Chelsea if the Spanish club see out Napoli in the last-16 tie.

For now, the only two confirmed fixtures in the last eight ties are RB Leipzig vs Atletico Madrid and PSG vs Atalanta.

The conclusion of the tournament has been confirmed to take place in Lisbon, Portugal. Round of 16-second legs 7-8 August. Quarter-finals (Lisbon) 12–15 August. Semi-finals (Lisbon) 18–19 August. Final (Lisbon) 23 August.