Ayo Fayose, the former governor of Ekiti State, is said to have sent an open letter to Bola Tinubu, the National Leader of the All Progressives Congress, APC.

The letter, written by the former presidential candidate himself, asked the APC leader to put his presidential ambitions to rest.

As a result of his missive, Fayose stated that he saw trouble ahead of the Asiwaju.

Despite the fact that several evident grammatical flaws in some lines raise suspicions about the letter’s legitimacy, no response has been received to cast doubt on the missive’s originality.

Parts of the letter read: “I am writing based on my observed views and the attached possible dangers about your good-self against tomorrow.

One of the undeniable facts is your outburst in Abeokuta, which is a clear indication that you clearly saw a political danger to which you reacted. This informed the basis of my writing to you now.

I equally read the reactions of your political allies both in the North and in the South. The reactions gave me great cause of concern for you and your life. Again, I see danger!

“As a knowledgeable student of history whom you are; our great late sage, Chief Obafemi Awolowo and the celebrated winner of the June 12, 1993 general election; Alhaji Moshood Kashimawo Olawale Abiola, were led to the Golgotha by self acclaimed “champions of democracy.” I am sure the same people may advise you to ignore my advice.” 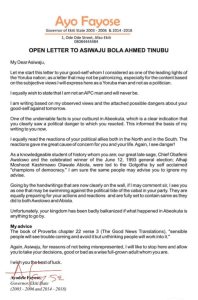 Osun Guber: ‘My confidence in your re-election based on your excellent performance’ – Owa Obokun Adimula
2 hours ago