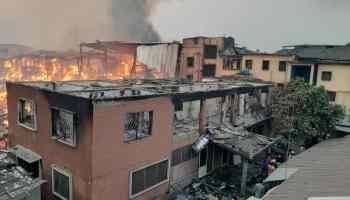 The Mokland Hotel, located at 3/9 Olakoleosho Street in Ikeja, Lagos, was gutted by fire on Monday evening, demolishing other buildings in the process.

So far, no life loss has been recorded. According to an eyewitness, the fire started around 7 p.m. on the topmost Penthouse floor of the building.

The cause of the fire could not be determined as of press time. Mr Amodu Shakiru, a spokesman for the state fire department, verified the occurrence, stating that the Lagos rescue team is preventing the fire from spreading to further levels and neighboring structures.