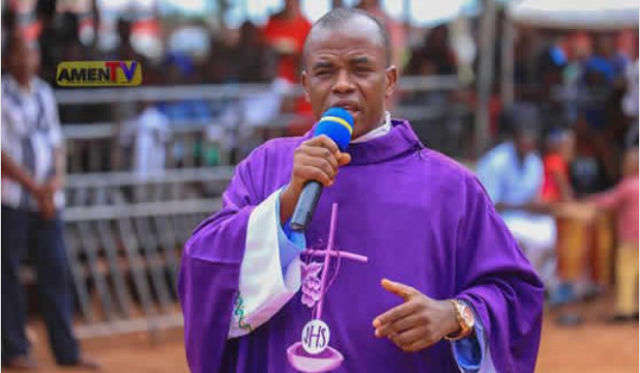 Following that, the presidency revealed that he was threatening Buhari because he had been denied a contract.

The priest has now been reported missing by the Ohanaeze Youth Council.

Mbaka was last seen on Tuesday, according to the President-General of the OYC, Mazi Okwu Nnabuike, who added that any attempt to locate him had failed.

“We have it on good authority that his aides have neither seen nor heard from him since Tuesday.

“Calls put to his mobile line have also remained unanswered; this has now prompted us to issue this alarm as we would not take it lightly should anything untoward happen to him.

“We are giving the Federal Government 48 hours to produce the priest, else they should be ready to face Igbo youths. They were dining and wining with him all along and now that he told the truth, they are no longer comfortable with him.

“Let nothing happen to Rev. Fr. Ejike Mbaka. It will not be in anybody’s interest,” the group warned.

Meanwhile, DAILY POST reached out to close aides of the Catholic Cleric but they declined comment, noting that the picture was not clear yet.

“Today is the Wednesday programme, ‘E no dey again’, if he don’t officiate, it will then be clear that something is wrong,” one of them said.

But a source who refused to be named disclosed that he was last seen yesterday, Tuesday, when he departed to honour an invitation by his Bishop.

DAILY POST also learnt that following the apprehension, all the youths of the ministry have been summoned to the Adoration ground.

The message inviting the youths to the Adoration ground, obtained by DAILY POST read, “Important!

“Good morning friends and well-wishers. Please if you know you stand for justice and you do not want the lone voice that speaks for the poor in this country to be silenced, gather at Adoration ground let’s go for a protest at the Bishops court.

“Fr. Mbaka is nowhere to be found. He went yesterday to answer the Bishop’s call and up till now, he’s not taking his calls. Let’s gather! SSG.”

Popular Prophet Reveals What God Told Him About ‘Coup Against Buhari’