There has been another explosion at a fuel station at Izombe in Oguta Local Government Area of Imo State on Wednesday. 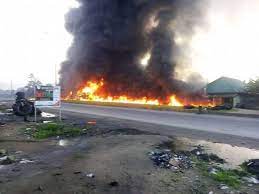 Eye witness who disclosed the incident to Sun Newspapers said 2 persons died in the incident which occurred very early in the morning.

The source noted that the victims involved were actually attempting to detonate the bomb at the fuel station before it exploded on them.