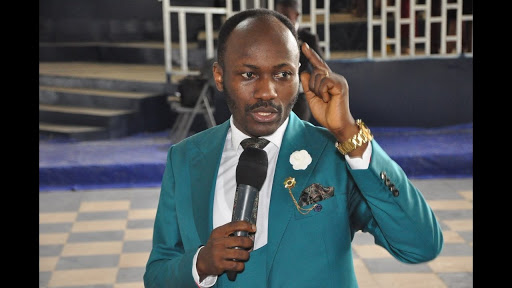 As Christians all over the world have taken advantage of the Easter period to cry out to God for healing miracles from coronavirus, a family who tested positive for the virus has reportedly been healed.

This was made known during the Good Friday church service of the Senior Pastor and General Overseer of Omega Fire Ministries International, Apostle Suleman Johnson.

During the service, it was announced that a man, whose entire family tested Positive for Coronavirus, joined the pastor’s online church service, and they become totally healed of the virus after experiencing the power of God.

Remember that the Senior Pastor and General Overseer of Omega Fire Ministries International, Johnson Suleman (popularly known as Apostle Suleman), had made shocking revelations about the Coronavirus (COVID-19) disease ravaging the world.

Speaking during his church ‘Fire Night’ programme, held on Friday 27th March 2020, the clergy said the agenda behind COVID-19 is to create a new world order.

He said; “The Lord said I gave this world to man and as such, I don’t do anything in the world until man invites me with understanding in the place of prayer. The nation in question (China) has sinned greatly against the Lord. They wanted to make their own moonshine brighter than the natural moon.

Their power tussle is between a particular nation and they want to bring that nation under their feet. “COVID-19 is an experiment and they are happy that they could shake the world and they would wait for another two years.

In 2022 if I tarry to come, something worse will still come and it will originate from them.

“The world leaders are coming together to make a synergy that will make all religions have a common ground and the pope is part of it. America is their target but the current president Donald Trump is their obstacle. America should not joke with the next general elections as they will all support the opponent.

“Their agenda is to humiliate him(Trump). They have succeeded in humiliating him while they are free from it but the prayer of the saints will reverse it and America will be healed. The virus was manufactured by these people (China) it is not a biological issue, it is a chemical weapon.

“Many people contacted it through testing, once you go for the test you are infected. The few that are not positive is to balance the equation and make people believe it is real.

“The vaccine will come, but the vaccine will carry the actual disease. It is loaded with signals to control the human body by sending signals from the body to their database, that would be the only proof to them that you are safe, virus-free and you are not contaminated.

“When they tell you to take the vaccine and you refuse, you’ll be denied a lot of things. Italy was sacrificed for this agenda because the pope is a part of this that is why we saw almost the largest cases in Italy it was not a coincidence, it was a sacrifice.

“The policy of not having people gather together to reduce and contain the virus is targeted at disrupting the believers from gathering to pray because they know when believers gather together to pray their plans and agenda will end up in futility we must not keep quiet as the prayers of the saints will stop them.

“All believers must lift up their voice against the spirit of the new world order and scatter the agenda of the antichrist. They will come up with a new currency to unify the world and solidify control. Purify your body of any sin because they target your body.

“They have tried this and it has worked. By June to August different agenda to unify the world will begin. Kuwait, Malaysia, Egypt, Singapore, Hongkong, Thailand, Madagascar, Saudi Arabia, America, need special prayers.

“If the church can pray using Jeremiah 17:14, Matthew 17:14, the antichrist will not overcome the church. If the church rises up in unity, purity and prayers then God will rise up and prove that he is still on the throne.