The tragic incident occurred in the early hours of Friday, December 3, when enraged youths at Winners Way, Oyebamiji Street, Bashorun Ibadan, set fire to an unidentified person over the theft of a phone.

It discovered during its inquiry that the individual who was burned was accused of stealing a motorcycle, but that verified information revealed that the stolen item was an android phone from the owner, which he and other suspected robbers seized.

The owner of the phone, who declined to provide his name when chatting with the online news outlet, said that the individual who was burned and his fleeing colleagues asked for directions to Iwo Road, and he indicated how they could find it. 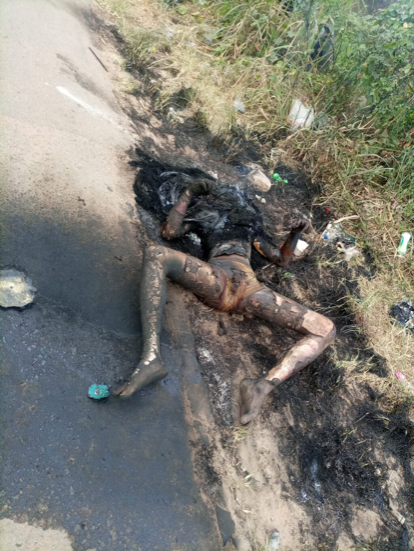 He went on to say that they came around and requested him to hand over his phone, which he resisted, and he was forced to take it from him.

He claimed that as soon as they seized the phone from him, they bolted, but one of them met his waterloo after failing to flee with the rest.

He claimed that when the enraged youngsters apprehended him, he was savagely beaten into a stupor before being set ablaze.

In an interview with CSP Oyekan Afeez Alabi, Divisional Police Officer, DPO, Agodi Divisional Headquarters, Iwo Road, Ibadan Northeast Local Government Area of Oyo State, he revealed that he and his other NPF men in the axis tried everything they could to prevent them from setting him on fire, but to no avail.

He emphasized that as soon as they were informed of the tragic event, they all sprung into action, and that as they were on the spot, they discovered that they had wrapped a tyre around his neck, doused him in gasoline, and set him on fire without listening to them.

DPO, on the other hand, warned people against taking law into their own hands, emphasizing that jungle justice is a serious offense that men of the law and the country as a whole cannot afford to ignore.