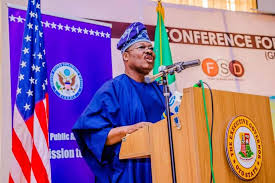 The family of the late former governor of Oyo state, Abiola Ajimobi, has announced the postponement of the burial of the deceased.

The Nation reports that this was announced on Friday, June 26, by Ajimobi’s spokesman, Bolaji Tunji, who told reporters in his Oluyole, Ibadan residence that the family would soon make an announcement of the burial programme.

“The funeral arrangements will be announced soon by the family but it will be observed privately so as to be in accordance with the Nigerian Centre for Disease Control (NCDC) guidelines,” he said.

He appealed to sympathisers, who have been thronging his residence, to continue following NCDC guidelines by washing their hands, using face masks and keeping social distancing, among others.

Ajimobi died in a private hospital in Lagos on Thursday, June 25, at 70.

It was reported that Ajimobi died in Lagos on Thursday, June 25, from complications arising from COVID-19.

Tunji, in a tribute published on his Facebook page on Friday, June 26, revealed how the politician made a journey of no-return from Ibadan, the Oyo state capital, to Abuja, the nation’s capital.

According to him, it was during that fateful trip that the late senator took ill and did not recover.

Ajimobi was until his death the deputy national chairman (south) of the ruling All Progressives Congress (APC).

Also, it was reported that when the political fraternity of Oyo state and the national ruling party, All Progressive Congress (APC), needed his elderly wisdom and enviable political experiences, Ajimobi’s death broke with shock and silence.

The former governor was said to be hospitalised at First Cardiologist and Cardiovascular Consultants Hospital, Lagos on June 2, but he never recovered from the infection after his health deteriorated.

It was noted that if anything could describe Senator Abiola Ajimobi, it would definitely be his bold ideas, rub-hitting speeches and his dauntless courage ― the reason he was adorned with a pseudonym “Constituted Authority” following his viral daredevil response to the protest of students of Ladoke Akintola University (LAUTECH) in 2018.