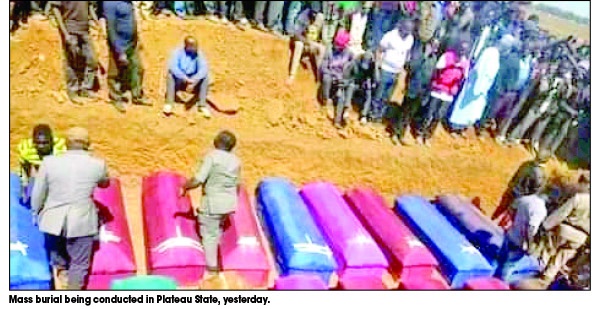 Tears flowed freely yesterday as the people of Kwattas village in Bokkos Local Government Area(LGA)  of Plateau State ,conducted mass burial for 23 persons who were recently murdered by suspected herdsmen.

Daily Sun gathered that the residents wept uncontrollably as they watched their relatives  being buried in  mass graves at about 2pm.

The residents who dressed in black attires gathered as early as 6.30am  at Luna Mortuary in Bokkos town  to bade  farewell to their relatives . Commercial activities in the area were grounded as Shops owners ,  and schools in the area closed their businesses to pay last respect to the dead.

A youth leader, John Akans ,said: “Bokkos community is in a mourning mood. 13 persons  were attacked and killed on Sunday night in Kwattas. Two victims died on Monday and eight  others were killed in different parts of Bokkos .

Meanwhile, Plateau State Police Command has transferred  some of the arrested  Fulani leaders and  other community leaders from Bokkos, Mangu, Barkin-Ladi and Riyom Local Government Areas to Abuja,for interrogation .

The State Police Commissioner, Isaac Akinmoyede,said he  acted on the instruction of Plateau State governor, Simon Lalong, who ordered him  CP to arrest Fulani Ardos and community leaders from the affected areas until those responsible for the killings are fished out.

Similarly, Plateau State government has  approved a bill  prohibiting  forceful grabbing of lands and landed properties by armed persons in the State. The Attorney- General and Commissioner for Justice, Plateau State, Chris Ahmadu ,and his counterparts, Commissioner for Information and Communication, Dan Manjang, said during a press briefing after the State Executive Council meeting, presided by  Lalong at Government House, Jos, said that the forceful occupation bill  known as Anti-land grabbing bill also proposed stiffer penalty on robbery, kidnapping , cultism and other violence related matters.

“The bill prescribes very stringent penalties. Any armed people  that invade a community will face death  penalty . The mere fact that you can successfully displace the community is not the end of the story.

The attorney -general said that cultism had become a serious issue in the state ,but lamented that until the proposed bill   there was no stiffer  law to punish members.

“The punishment for the existing law against kidnapping was very mild. But with the new law, if you kidnap somebody and you are caught and convicted you will be sentenced to death.

“We feel such severe punishment is very necessary to serve as deterrent to those who indulge in such vices,”he stated.

He announced that the bills as approved by the executive council would be forwarded to the State House of Assembly for passage.

Update: Bishop Oyedepo offered US visa he was initially denied after phone call