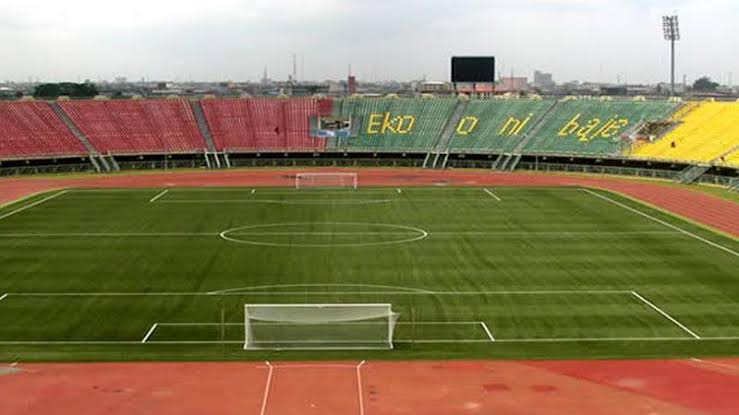 The Teslim Balogun Stadium in Surulere, Lagos, has a fresh look ahead of Nigeria’s play against Liberia in the FIFA World Cup Qatar 2022 qualification match on Friday.

Groundsmen and other support workers were spotted putting the finishing touches on the stadium, according to a NAN correspondent who visited the site.

There were also cleaners sweeping the spectator stands and the state box, as well as painters working on the railings and stands.

The Nigeria Television Authority Out Station Service bus was also being mounted, as were the communication gear and connection cables for the official transmission of the match.

The newly installed grass pitch was not forgotten, as it was given a fresh coat of paint and had water sprinklers set on to keep it moist.

Banners advertising the match were erected in strategic locations throughout the stadium, and the seats of spectators were designated, as required by COVID-19 procedures.

Sola Aiyepeku, Chairman of the Lagos State Sports Commission, informed NAN that the venue was totally prepared to host the match after the requisite preparations were made.

“The road has been a tough ride, but it is a good thing getting our facility ready for the World Cup qualifiers. We have what it takes to prepare the place in readiness for the match.

“Going round on inspection, our facility managers are already on ground, the groundsmen, sweepers, the pitch managers and other logistics, being put in place.

“We are so lucky to have our sport loving governor, who gave his approval, and I want to thank Gov. Babajide Sanwo-Olu for making it happen because he shares our vision.

“If not for Governor Sanwo-Olu’s vision, we will not have come to this point and also the good thing is that the Super Eagles themselves love Lagos,” he said.

2022 World Cup: Ahead Of Nigeria vs Liberia Match, Teslim Balogun Pitch Gets Waterlogged