Some days back, social media went agog over the video of a bride who appeared to be outshined by one of her bridesmaids who donned a quite revealing outfit to the ceremony and was virtually the center of attraction.

In the video, while the bride is flanked by her bridal train as they dance their way into the ceremony, one particular bridesmaid whose cleavage was out for everyone to see got the attention of a lot of people, cause she danced and jiggled her bosoms which was much to the delight of a gentleman who went to her and sprayed her money.

The video caused a stir on social media with so many reactions from netizens some of which were not comfprtable with what the lady and were quick to say if it were their wedding, they’d have chased her out and some were of the notion that it’s not the lady’s fault that she got outshined.

Well, in a new video that’s currently serving rounds on social media, another bride is seen on her wedding day and is flanked by her bridal train, but it sure would be hard to steal her shine on her special day as the outfit she donned would definitely make her the center of attention, whether negatively or not.

In the video, the happy bride is seen dancing her way into her wedding ceremony in a cleavage baring outfit and this has caused netizens to react in contrast to the earlier mentioned bride.

In his ridiculous weekly piece, Femi Adesina described Nigeria as dangling testicles of a ram 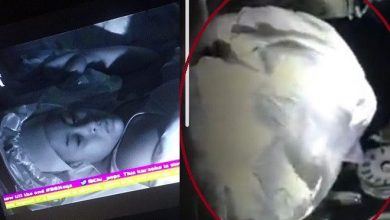