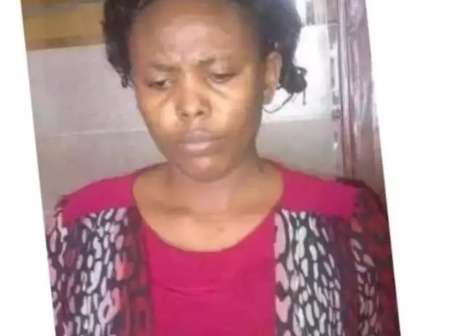 A 39-year old housewife, Mrs. Nkechi Agbor, has been arrested by detectives attached to Area C Police Command, Lekki, Lagos for allegedly hiring assassins to eliminate her millionaire husband, Godstime, in order to inherit his property.

P.M.EXPRESS reports that the incident happened at Badore Estate, Lekki area of Lagos, where they reside.

Mrs. Nkechi landed in the mess after she discovered that her husband was rich, had properties and she started planning on how to inherit them. The mother of two felt her only option was to eliminate her husband and she reportedly paid assassins the sum of N500,000 in order to kill her husband.

However, it leaked after one of the hired assassins, Festus Onyebuchi, was apprehended and he named her as the person who contracted him to kill her husband. The suspect, Festus, was arrested while trying to break into Mr. Godstime Agbor’s apartment at Badore Estate to not only kill him but also to steal from the house before he was caught in the act.

During investigation, it was discovered that one of those who she hired for the botched assassination was an electrician, simply identified as Chibuzor, who usually worked for Mr. Godstime Agbor.

Festus in his confession said he was contracted by Mrs. Nkechi to kill her husband with the agreement to pay him 500,000 Naira.

“On the third day, it was Mr. Godstime that opened the gate and the plan was to rush to stab him in the neck, heart side of the chest and rib.

Mike, who was supposed to kill him, went to urinate and by the time he got back, Mr. Godstime had gone inside and shut the gate. So, out of frustration we went back home.”

“Thereafter, i decided to go to Mr. Godstime’s house alone to steal instead. As i jumped into his compound through the fence, somebody raised alarm which attracted members of a vigilante group in the area, who apprehended me.”

“I regret my actions and i hope i will be given a second chance” he said.

Mrs. Nkechi has reportedly confessed to sending hired assassin to eliminate her husband and her reason was to inherit her husband’s properties.

Police sources said that Nkechi and the other suspects will be charged to Court after the conclusion of investigations.