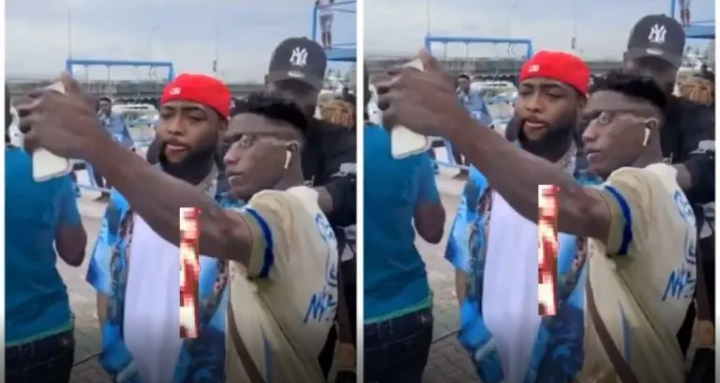 The bodyguard of Nigerian superstar artist Davido has been blasted on social media for what he did to a fan attempting to snap a photo with the musician.

In a video circulating on social media, a fan of the phenomenal musician attempted to snap a photo with him but was shoved away by Davido’s bodyguard.

Although Davido did not respond to the circumstance, his facial expression suggested that he was exhausted and uncomfortable.

Netizens blasted the singer’s bodyguard for acting in this manner, claiming that Davido is humble and would never turn away a fan in this manner..

topman_tech wrote: This is not so cool. But Davido is down to earth. I know he will scold the bodyguard

kemiolunloyo wrote: Which kind bodyguard be this one? No muscles, see bony leg.

sharrythefirst wrote: It’s the fact he was ready to take pic with him for me!An humble king I Stan!!

nelson_emmanuels wrote: Over sabi body guard. Davido was even too tired to think

thetruthtellerongram wrote: Celebrities are humans too, respect their privacies.

Twitter Ban: We Won’t Vote For Any Politician Above 65 In 2023 — Banky W Laments