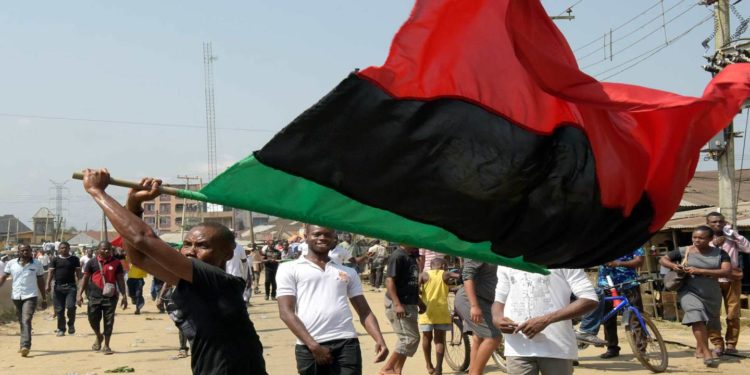 The Indigenous of People of Biafra (IPOB) has vowed not to succumb to pressure by the military to stop its members from attending the burial of the parents of its leader, Nnamdi Kanu.

The proscribed group said it was aware of the numerous plans and strategies of the military troops deployed to the region in preparation for the burial of the deceased, who it referred to as its “first parents”.

In a statement on Wednesday by the Media and Publicity Secretary, Emma Powerful, the group described the presence of Nigerian army and police as an insult to the people of Biafra and the Igbo race in particular.

The pro-Biafran group warned the military to steer clear of the burial venue, just at it cautioned mourners attending the ceremony to conduct themselves in a manner consistent with the noble ideals of its ancestors.

The statement partly reads: “We the global family of the Indigenous of People of Biafra (IPOB) wish to reiterate in clear and unambiguous terms that what Nigerian police and army are planning to do in Afaraukwu during the burial of Eze Israel Okwu Kanu and his wife on Friday 14th of February 2020 will set-off a chain reaction that Nigeria will never recover from.

“Common arbitrary arrest of any mourner this week Friday is capable of inciting a disproportionate reaction from angry mourners. IPOB is warning all agents of Nigerian government in Biafraland, traitors and caliphate slaves alike that what will befall CP Okon will also be their portion should shots be fired in Afaraukwu. The era of Nigerian army and police shooting innocent mourners in Biafraland has come to an end.

“What is happening in Umuahia with the provocative presence of Nigerian army and police is an insult to the people of Biafra and the Igbo race in particular. All those that have in various ways supported the unprovoked murderous clampdown on IPOB will pay dearly for it.

“IPOB has remained peaceful but it seems the Nigerian government is hell-bent on provoking us into armed struggle that will inevitably precipate the violent disinetegration of Nigeria. Nigerians should call their government in Aso Rock to order and impress upon them the need for their army and police to steer clear of the whole of Umuahia township on February 14, 2020 in the interest of peace.

“They should head to the north where there are countless security challenges. We want to join the people of Afaraukwu in peacefully mourning the death of HRM Eze Sir I.O Kanu and his wife in peace, who it must be said died as a result of Nigerian army and police invasion of their home on September 14, 2017.

“What Nigerian army and police are doing in Umuahia cannot happen in the north. We do not think the Alimajiri populations of the north will allow the burial of an Emir to be subjected to such needless tension and ridicule but in Biafraland anything goes because of the reign of puppets and quislings.

“As we continue to receive daily threats from the army and police regarding their impending massacre of innocent mourners on Friday February 14, let the world be on notice that the floodgates of hell will be opened should the army or police appear anywhere around Afaraukwu on the day of the burial. Let those that may feign ignorance of the fact be duly warned on time that burial ceremony is sacred in Igboland, especially that of a king, therefore the intended nuisance of Nigeria security personnel will not be tolerated on Friday.

“We are aware that those behind the deadly invasion of September 2017 are the same people working with Aso Rock to bring mayhem to Umuahia on Friday. Out of public view, these politicians and so-called socio cultural leaders have been offering finacial support to Fulani soldiers in Obinze, Ohafia, Abakiliki, Onitsha and Asa in readiness for their deadly deployment to Umuahia. Their plan is to kill as many people as possible to demoralise our leader and pave the way for a full scale Fulani invasion and takeover of our land.

“We are equally in the know of the numerous plans and strategies of the troops so far deployed by Buratai to the east in preparation for the burial of our first parents. It’s quite obvious to the average reasonable person that IPOB will not succumb to their pressure regardless of the consequences.

“All their perfected plans to disrupt the burial on that very day is common knowledge among diplomatic circles all over the world who will be following the proceedings live on Biafra Television, social media and Radio Biafra platforms.

“The plan by Nigeria’s Chief of Army Staff Lt. General Tukur Buratai to use the burial ceremony of HRM Eze Israel Okwu Kanu to eliminate and kill anybody suspected to be IPOB supporter in Umuahia on Friday 14th of February 2020 is equal well known, documented and powers that be duly notified.

“We want to make it abundantly clear that if the Police and Army fire a single bullet on that day there will be no peace for every soul involved, especially those that issued the order from the comfort of their offices in Abuja, Enugu, Owerri and Umuahia. We need a peaceful  funeral, the ancient laws of our land demand it and nobody should try IPOB.

“IPOB is strategically monitoring every individual politician in the South East and governors over their actions and inactions towards this burial on Friday. All those who  may have joined the Fulani boy-boy CP Ene Okon of Abia State to encourage Fulani soldiers to come to Afaraukwu to kill people on Friday will pay very dearly for their actions.

“It is unfortunate that some Igbo politicians and their supporters would encourage Fulani terrorists and Boko Haram soldiers recruited in Nigeria Army and Police to kill our people in a funeral ceremony, a sacrilegious act that has never happened before in the history of Igboland, Biafra and Nigeria.

“Every Biafran must be prepared this time, IPOB would not allow these marauders to repeat what they did in Umuahia on September 2017 in this 2020 and definitely not during the burial of the parents of our leader. Nigerian army and police must stay away from Umuahia as a whole.

“We are informing every mourner attending the burial on Friday to conduct him/herself in a manner consistent with the noble ideals of our ancestors.

“All approach to Umuahia is rigged with CCTV cameras to monitor human and vehicular traffic because IPOB won’t accept any confusion or misunderstanding from anybody.

“Biafra independence and freedom is inevitable and nobody born by a mere mortal can stop it.”