A Federal High Court sitting in Abakaliki has disqualified Governor David Umahi of Ebonyi State from contesting the election for Ebonyi South senatorial district seat on the platform of his party, the All Progressives Congress (APC). 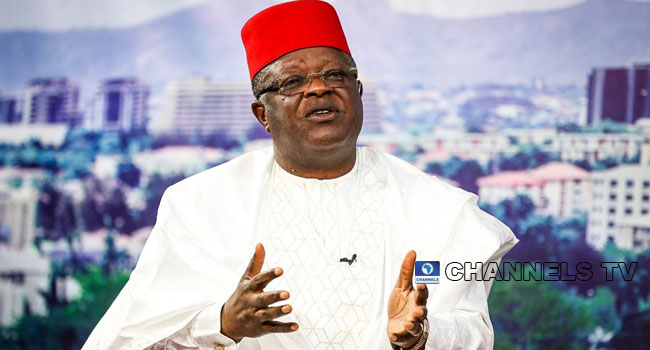 Similarly, the court disqualified Mr Austin Umahi, who is the governor’s younger brother from also participating in the election on the party’s platform.

The younger Umahi had clinched the party’s ticket to contest the election in the senatorial district after he emerged the winner of the APC primary in the zone.

He later resigned to pave the way for the older Umahi to contest the Ebonyi South senatorial district election after the governor lost out in the APC Presidential Primary to former Lagos State Governor, Bola Tinubu.

During a court proceeding on Friday, Justice Fatun Riman declared that with the withdrawal of Austin Umahi after winning the primary, the authentic candidate of the party for Ebonyi South senatorial district was Ms Ann Agom-Eze who came second in the primary.

According to the judge, Section 115 of the Electoral Act forbids a person from contesting two different primary elections in the same year.

In a swift reaction to the court’s decision, the Special Assistant to Governor Umahi on Strategy, Chris Oko, said the judge was misled by Agom-Eze.

He alleged that Agom-Eze lied on oath that she never withdrew from the contest, stressing that there would be a rerun of the election.

The Independent National Electoral Commission (INEC) had in June published the names and particulars of candidates vying for various positions at the federal level in the 2023 general elections.

But Governor Umahi’s name and particulars were missing from the list published by the electoral body as INEC said it never monitored any rerun primary announcing him as candidate.

Displeased with the development, Governor Umahi approached the Federal High Court seeking an order for INEC to publish his name as the candidate of the ruling party for the election in the senatorial district.

Ms Ann agom-eze had also applied to be joined in the suit.

(UPDATED): Woman who set husband ablaze for having child out of wedlock commits suicide