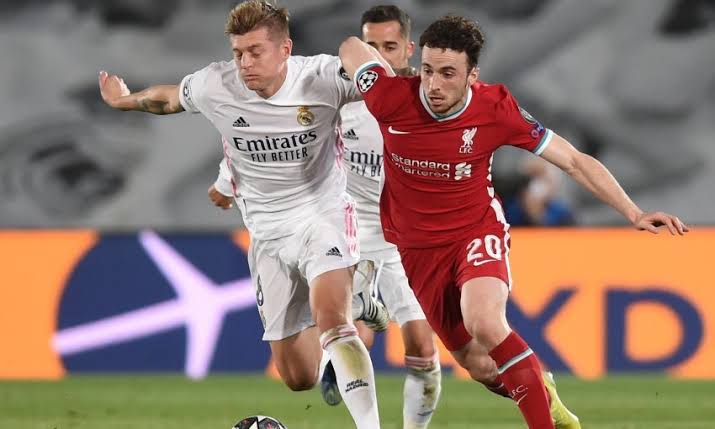 Real Madrid beat Liverpool 3-1 in the first leg of the Champions League quarterfinal on Tuesday night.

In the first half, Madrid took charge of the game, scoring two goals.
After a brilliant long-range pass from Toni Kroos, Vinicius Junior scored the game’s first goal in the 27th minute.

In the 36th minute, Marco Asensio doubled the lead for the Spanish side, leaving Liverpool reeling.

The Reds came out fighting in the second half, with Mohamed Salah scoring in the 51st minute. Vinicius, on the other hand, made it three for Madrid, leaving Liverpool with a mountain to climb in the return leg.

On April 14, Liverpool will host Madrid in the second leg of the Champions League quarter final at Anfield.

Meanwhile, Manchester City won 2-1 at the Etihad Stadium against Borussia Dortmund of Germany.

Kevin De Bruyne put City ahead after 20 minutes, but Dortmund equalized in the 84th minute thanks to Marcus Reus.

City took a sliver of a lead at the Etihad Stadium thanks to a last-minute goal from Phil Foden. On April 4, City will fly to Germany for the second leg of the tour.