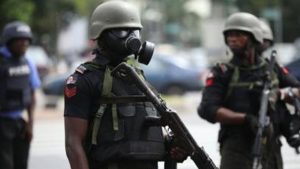 The police in Ogun State said they gunned down two bandits on Saturday while combing bushes in search of kidnappers terrorising the state.

Police disclosed that the suspected kidnappers were engaged in a gun duel at Bere forest, in Onigaari area of the Lagos-Ibadan highway.

This, Newsdirect learnt, was as the result of a tip-off from the public that “the AK-47 bearing hoodlums numbering about six were sighted in the forest,” possibly waiting for those to abduct.

The Commissioner of Police, Edward Ajogun, was said to have immediately deployed the command’s tactical teams, led by the DPO of Owode Egba Division, CSP Olusola Oniyiku, to comb the forest.

Sighting the policemen, the hoodlums were said to have opened fire on them and they responded appropriately.

The Ogun State Police Public Relations Officer (PPRO), Abimbola Oyeyemi, said on Saturday that one of the bandits was killed on the spot, while others escaped with gunshot injuries.

“While searching the forest, one of the bandits with bullets wound was arrested in the bush but gave up the ghost a few minutes after,” Oyeyemi said.

He added that two AK-47 rifles with breech numbers 1983NF1040 and 1987-3-CA-1212 and five rounds of ammunition were reportedly recovered from the criminals.