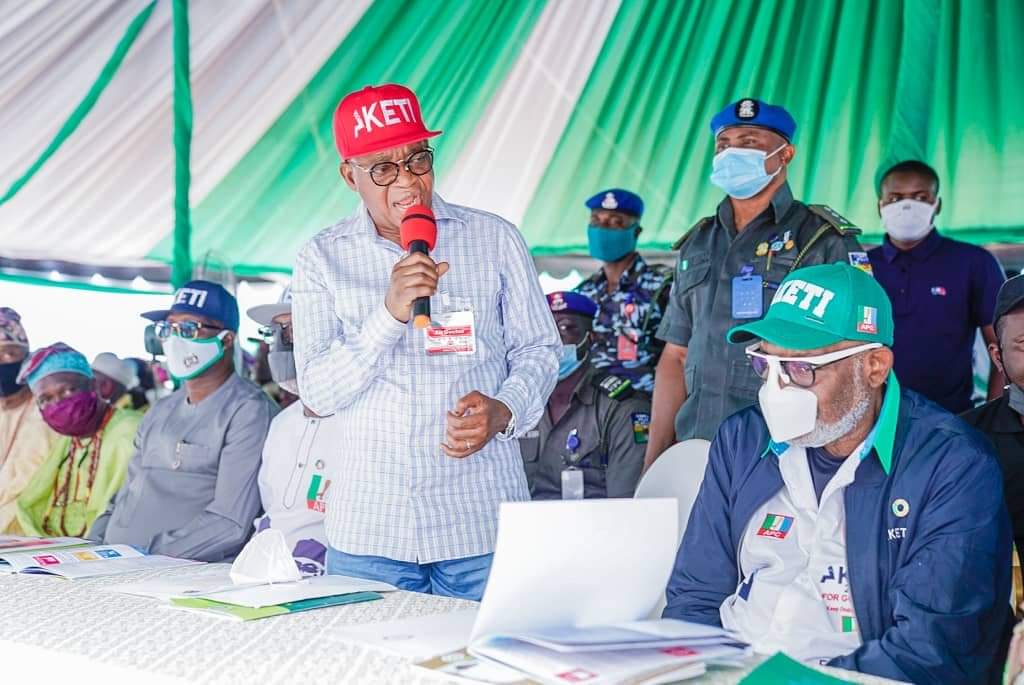 The programmes, he noted, are designed to make them to be self-employed, self-independent and self-reliant.

He said the time has come for government at various levels to narrow down focus on the informal sector by premising their policies and programmes on things that would reduce drastically, the mad rush for white cola jobs among the unemployed population.

Tinubu spoke at the official launch of the Asiwaju Bola Ahmed Tinubu Skill Acquisition Centre, in Ile-Oluji, Ondo State, through Governor Adegboyega Oyetola of the State of Osun.

The Centre, built by the Sustainable Development Goals (SDGs), Nigeria, was established to provide technical and vocational skills for the teeming populace.

The APC National Leader said the state of the nation’s economy has made it imperative for the citizens to think out of the box and brace up for entrepreneurship programmes.

He called on the people to see the Centre as a place where they can acquire maximum training and skills, saying the era of seeking jobs under government and its parastatals has gone.

“It is important for us to appreciate that skills acquisition is the best way to go for now in view of the nation’s economy.

“The era of white collar job is gone. Entrepreneurship is the best way to go for now. Just as it is important to acquire conventional education, skills acquisition is also the way to go.

“I commend the initiator of the Centre, the Senior Special Assistant to the President on Sustainable Development Goals, Mrs. Adejoke Orelope-Adefulire, for this wonderful vision to rescue the people out of the scourge of unemployment.

“It is evident that this Centre can provide jobs for the teeming citizens, particularly residents of Ile-Oluji and Ondo State in general.

“I appeal to you all, particularly the beneficiaries of this Scheme to take the advantage of this Centre to learn skills that can make you to be self independent and become employers of labour and create jobs for others”, Tinubu said.

While commending the Federal Government for the timely implementation of the SDGs programme, the former Lagos governor also urged the host community to put the facility to good use.

He seized the occasion to canvass for the people’s support and cooperation for the Akeredolu-led Government in the State, just as he urged them to re-elect the governor for a second term.

Inaugurating the centre, the Ondo State Governor, Arakunrin Oluwarotimi Akeredolu, applauded the administration of President Muhammadu Buhari for taking the welfare of the citizens as priority.

He lauded the leadership of the SDGs in the country for taking Nigerians out of the scourge of unemployment, poverty and hunger.

Akeredolu who described the initiative as a complement to numerous people-oriented programmes of his administration, said the Centre would go a long way to reduce poverty among the people.

He sought the continued support of the people of the State and assured them of further good works when he is re-elected for a second term.

Earlier, the Senior Special Assistant to the President on Sustainable Development Goals (SDGs), Mrs Adejoke Orelope-Adefulire, said the Centre remains a strategic tool for the economic empowerment of the teeming youths.

Orelope-Adefulire who commended President Muhammadu Buhari for his continued commitment and support for the implementation of the SDGs in Nigeria, said the initiative was aimed to improve the economy, eradicate poverty, banish hunger and stamp out societal vices among the unemployed segment of the population.

“A crime-free society is the one that its youths are productively engaged. Investing in youths will lead to poverty eradication, which in turn leads to social security”, she added.