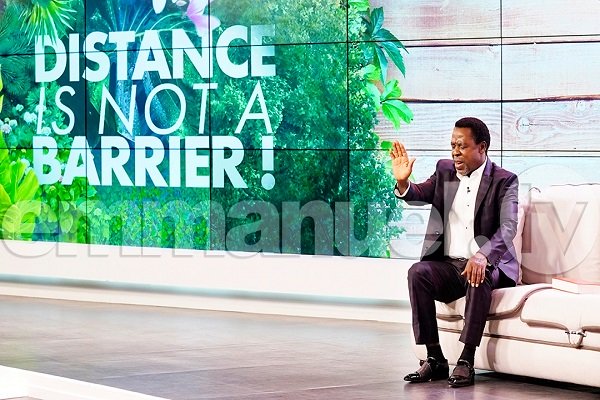 …Says Novel Coronavirus is ‘a mistake’

Founder of the Synagogue Church of All Nations (SCOAN), Prophet T.B. Joshua, has offered ‘virtual prayers’ of healing for those afflicted with COVID-19 in an Isolation Centre in Honduras, Central America.

The gesture was in fulfilment of a pledge the cleric made on July 8, 2020.

“Where can we go from God’s presence? Distance is not a barrier because He is Spirit,” Joshua declared in front of several huge screens relaying in real-time the footage from the several wards within the Honduran Isolation Centre.

“By the power of the Holy Spirit – that affliction, that COVID-19 – be flushed out,” he said, stretching his hands towards the dozens of patients on the multiple screens at the Emmanuel TV Studios in Lagos, during a programme tagged ‘Interactive Prayer Session’.

During the prayer – which was translated simultaneously into Spanish – several patients began to involuntarily ‘vomit’ whilst others rose to their feet from their hospital beds, waved their hands joyously and removed the oxygen apparatus fixed to their nose as a sign of “supernatural healing”.

“Jesus that has freed you will help you to maintain your miracle. Make the Word of God the standard for your life,” Joshua counselled after declaring dozens of COVID-19 patients “free”

“I sensed the healing and delivering power of God,” explained Aracely, one of the Honduran patients, after the prayer. “I felt my lungs fill up with air… I’m no longer using the oxygen mask,” she testified.

“I saw a white light that illuminated me and asked me to remove my oxygen mask,” another lady stated. “I’m not choking any longer,” she excitedly stated, with others testifying their sense of smell and taste was restored and their strength revitalized following the prayer.

Afterwards, representatives of the medical staff at the hospital thanked Joshua for his prayers and support.

The video concluded by stressing that it was not intended to “discourage anyone from seeking medical treatment” as “good Christians are good citizens”.

Last month, the World Health Organisation reacted to a video in which a Cameroonian medical doctor was ‘healed’ of COVID-19 after receiving “interactive prayer” from Joshua’s ministry, acknowledging “spiritual leadership is very important in a time like this”.

Since starting its ‘Interactive Prayer Sessions’ – in which online prayer is offered via video calls – Joshua’s ministry has prayed for COVID-19 patients from around the world, prompting the cleric to recently declare his readiness to freely pray for those in Isolation Centers.

Joshua, who had been absent for seven weeks from Emmanuel TV’s broadcasts, earlier shared a sermon titled ‘Mistakes Are Correctable’

“We wake up in the morning determined to get it right. Before we know it, we have missed the mark,” Joshua began, stressing that “making a mistake” was not the issue but “how we handle it matters.

“For instance, the issue of COVID-19 is a mistake. However, how we are handling it has led us to where we are today,” he continued, citing the uncertainties and “twists and turns of life”.

“If you make a mistake, as we all do sometimes, don’t run from God; run to Him,” Joshua taught, adding that mistakes actually “make Christian life more interesting and more valuable” and serve as a means to “draw us closer to God”.