Princess Damilola, a Nigerian comedian and actress, has confessed that she has been dealing with agony and sadness for the past two months.

As previously reported, Prince has made news several times in recent months when his daughter was defiled by her colleague, Olanrewaju James, also known as Baba Ijesha.

The actress resorted to social media to express her sorrow for her late father, adding that he would have turned 69 today, but he is no longer with us.

Princess described her father as her best partner and travel companion, saying that she misses him terribly.

According to the comedian, she has been through a lot of heartbreak and disappointment in the last two months and has no one to confide in.princesscomedian wrote: Daddy, you would have been 69 years old today. My gist partner and travel buddy, I miss you so much it hurts. so much pain and disappointments in the last two months but no one to confide in. I know you have my back always, continue to rest with God 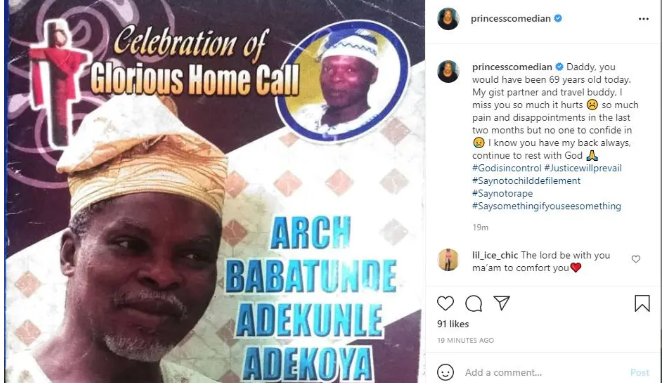