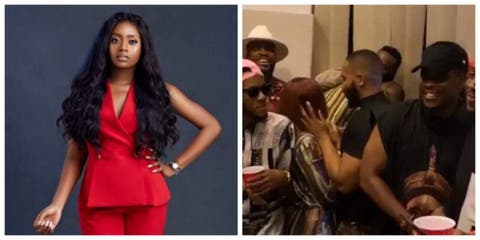 See what Kiki Osinbajo posted after Kiddwaya threw party for Erica
If you recall, last night was the Saturday Night party of the popular reality TV show Big Brother Naija, BBNaija and Kiddwaya used same moment to throw a private party for his ‘love interest’ in the house, Erica.

The party also had Prince, Tolanibaj, Brighto, Seyi among other former housemate in attendance. The party was the talk of the town yesterday since it coincided with the BBNaija party.

Daughter of Nigeria Vice President, Kiki Osibanjo who has never hidden her love for Erica and Kiddwaya while in the house also commented on the party.

She posted on her insta stories that “two parties was held tonight but one was worth talking about.”

After the party, Kiddwaya said:

Kidd: “yeah you know we talk on the phone. Yeah. We met to discuss deals and businesses because God’s time is the best. Yeah. She’s a strong independent black woman. Yeah yeah”

If you recall, while Kiddwaya was evicted from the show alongside Prince last week, Erica was disqualified over unruly behaviours the week before.

Edo 2020: Before You Cast That Vote Today