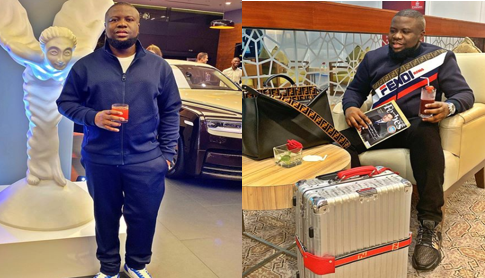 Nigerians woke up to the news of Raymond Igbalodely popularly known as Ray Hushpuppi’s arrest in the early hours of today at the United Arab Emirates. Multiple reports have it that the Nigerian big boy and his cohorts were arrested for diverting Coronavirus funds up to the tune of $35 million.

TheInfoNG gathered that the covid-19 funds diversion might be untrue as reports obtained from Dailymail claims that Hushpuppi and his fraud syndicate have been on the radar of the Federal Bureau of Investigations FBI for a while following an increase in unemployment fraud in the United States.

According to Daily Mail reports published a month ago, The Secret Service has been investigating a vast fraud ring of suspected Nigerian hackers who allegedly used bogus unemployment claims to steal hundreds of millions in taxpayer dollars intended to help jobless Americans.

The crime ring is exploiting the coronavirus pandemic and economic crisis by flooding overwhelmed state unemployment offices with bogus claims in the names of Americans who are still working, according to a memo reported by Krebs on Security.

The memo, sent to Secret Service field offices on Thursday, said that ‘substantial amount of the fraudulent benefits’ have used information stolen from ‘first responders, government personnel and school employees.’

Washington state, said to be a magnet for bogus claims, has already had to temporarily halt payment of benefits while it sorts through the surge of fraud, leaving jobless Americans in dire financial straits.

Tell Us The University You Attended – Obaseki Challenges Oshiomhole