Civil society organizations organized a peaceful protest at the National Assembly in Abuja on Wednesday, dubbed #OccupyNASStoday, to demand the prompt passage of the Electoral Act 2010 (Amendment) Bill.

The group also accused Ahmed Lawan, the President of the Senate, and Femi Gbajabiamila, the Speaker of the House of Representatives, of conspiring with some people to prevent the bill from becoming law. 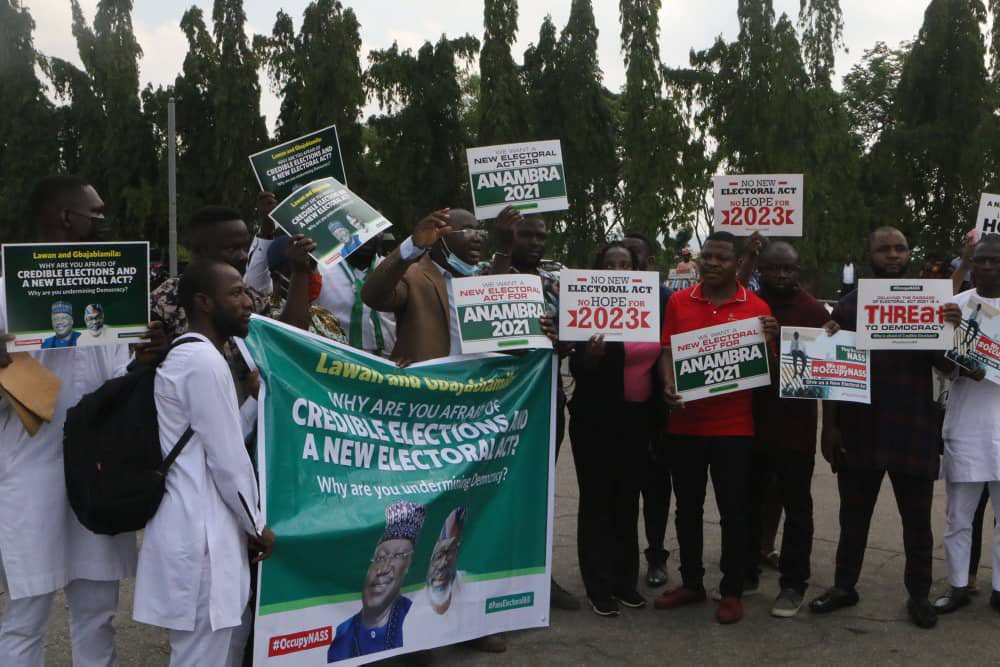 Nigerians were concerned that the National Assembly leadership had failed to meet the two deadlines established for the passing of the Bill (December 20, 2020 and March 2021), according to banners carried by protestors under the auspices of Alliance of Civil Society Organizations for Expansion of Electoral and Democratic Space (ACCESS).

The demonstrators rejected the overwhelming presence of armed police officers stationed at the complex’s main gate, vowing to keep the building occupied until their demands were met.

Ariyo-Dare Atoye, speaking on behalf of the coalition, said the group had learned that the National Assembly’s Joint Committee had completed the technical procedure on the Bill and that it was ready for third and final reading, but that the chambers’ leadership was impeding its transmission to the plenary for deliberation.

Atoye said,  “The leadership of the two Houses of the National Assembly must demonstrate that they are not part of an emerging conspiracy within the current ruling political elite to scuttle the conduct of the 2023 elections.

“They must immediately ensure passage of the Electoral Act 2021 on or before June 9, 2021, when the 9th Legislative Session shall clock two years, to show Nigerians that they are patriotic and committed to free, fair, credible elections.

“We also want this Act in place to guide the conduct of the Anambra governorship election scheduled for November 6, 2021.”

The group called on the lawmakers to expedite action and pass the bill in the interest of Nigerians and to enable the electioral body and other stakeholders adjust to the new realities of conduct of polls ahead of 2023 general elections.

The protesters said the continued delay and lukewarm attitude of the lawmakers towards the bill may force them to take further measures to drive home their demands should there be no positive response to their demands.