Former Georgia Republican Senator Johnny Isakson died Sunday at 76 in his Atlanta home after retiring from Congress in 2019 with Parkison’s disease.

‘It is with deep sorrow that The Isakson Initiative shares that former U.S. Senator Johnny Isakson passed away overnight on December 19, 2021, at age 76,’ a tweet shared from Isakson’s official Twitter announced Sunday.

‘Sen. Isakson’s family is grateful for the prayers and support,’ it added. ‘Funeral arrangements will be shared when finalized.’

He is survived by his wife, Diane, whom he married in 1968, three children and nine grandchildren. 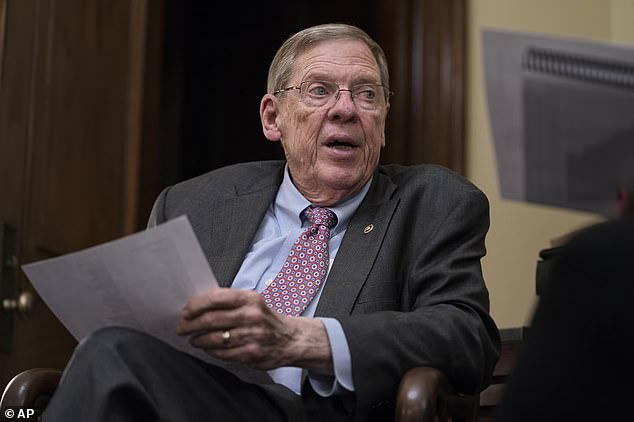 In June 2015, Isakson disclosed he had been diagnosed with Parkinson’s disease, a chronic and progressive movement disorder that left with a noticeably slower gate.

The Marietta Republican’s health issues left him frequently dependent on a cane or wheelchair.

He said at the time of announcing his diagnosis that it would not affect his 2016 reelection plans. He was elected in November 2016 to serve a third six-year term in the Senate.

Soon after winning reelection in 2016, he underwent a scheduled surgery on his back to address spinal deterioration.

In late August 2019, Isakson announced he would resign his Senate seat for health reasons effective on December 31, 2019 – two years before the end of his term.

The affable Georgia Republican politician rose from the ranks of the state Legislature to become a U.S. senator known as an effective, behind-the-scenes consensus builder.

Isakson’s son John Isakson told The Associated Press his father died in his sleep before dawn Sunday at his home in Atlanta. John Isakson said that although his father had Parkinson’s disease, the cause of death was not immediately apparent.

In the Senate, Isakson was the architect of a popular tax credit for first-time home buyers that he said would help invigorate the struggling housing market. His expertise came from his real estate business making him a millionaire.

‘His work to champion our veterans, deliver disaster relief for Georgia farmers after Hurricane Michael, and always stand up for Georgia’s best interest in the U.S. Senate will live on for generations to come,’ Georgia Governor Brian Kemp said in a statement.

He added: ‘As a businessman and a gifted retail politician, Johnny paved the way for the modern Republican Party in Georgia, but he never let partisan politics get in the way of doing what was right.’

In a farewell speech on the Senate floor, Isakson pleaded for bipartisanship in Congress at a time of bitter divisions between Republicans and Democrats. He cited his long friendship with the late Rep. John Lewis, an Atlanta Democrat and civil rights hero, as an example of two men willing to put party aside to work on common problems.

‘Let´s solve the problem and then see what happens,’ Isakson said. ‘Most people who call people names and point fingers are people who don´t have a solution themselves.’

The Atlanta native made his first bid for elected office in 1974 when he ran – and lost – a race for the Georgia House of Representatives. He succeeded two years later and went on to serve 17 years in the Georgia Legislature, with time in both the House and Senate.

He suffered a couple of humbling setbacks before ascending to the Senate. In 1990, he lost the race for governor to Democrat Zell Miller. In 1996, Guy Millner defeated him in a Republican primary.

Many observers chalked up the loss to Isakson not being tough enough on abortion. In the primary race, Isakson ran a television advertisement in which he said that while he was against the government funding or promoting abortion, he would ‘not vote to amend the Constitution to make criminals of women and their doctors.’

‘I trust my wife, my daughter and the women of Georgia to make the right choice,’ he said.

He later changed his mind on the contentious issue. Isakson´s jump to Congress came about when in 1998 U.S. House Speaker Newt Gingrich decided not to seek reelection. Isakson won a 1999 special election to fill the suburban Atlanta seat.

He finally made it to the U.S. Senate in 2004 when he defeated Democrat Denise Majette with 58% of the vote. In the Senate, he served with Georgia senior Sen. Saxby Chambliss, a close friend and classmate from the University of Georgia.