The Peoples Democratic Party (PDP) Board of Trustees (BoT) will tomorrow (Wednesday) meet to mediate in the lingering post-convention crisis, setting the stage for a face-to-face parley between two warring gladiators – Nyesom Wike, governor of Rivers State and Alhaji Atiku Abubakar, presidential candidate of the party. 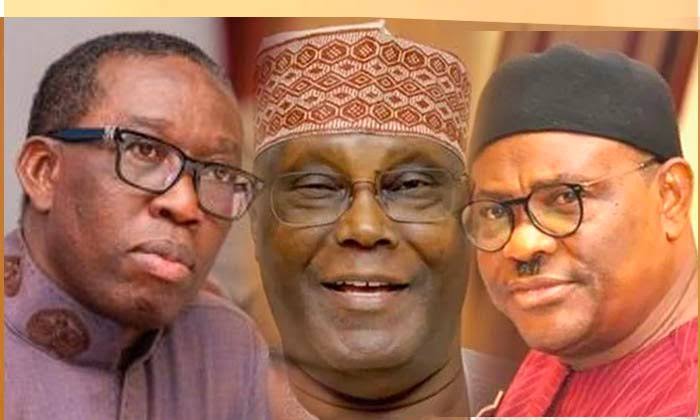 The major opposition party has been struggling to stay united since it concluded its primary in May to elect the presidential flag-bearer and then side-stepping Wike, favoured by a majority in the party, to announce governor of Delta State, Ifeanyi Okowa, as running mate to Atiku.

It was gathered that the meeting would consider demands of the aggrieved Wike-led camp. The Wike camp at their meeting on Sunday, in Abuja, was said to have insisted on the removal of the National Chairman, Iyorchia Ayu.

According to sources within the party’s national secretariat, the Wike camp also wants Atiku to sign an undertaking that he would spend only one term in office before they pledge their support for him.

Also on the list of demands to be considered by the BoT are that all members of the Wike team will be considered for appointment should the party win the presidential election next year.

In a statement by Jibrin, it pointed out that the Wednesday meeting would consider all the issues and come up with appropriate recommendations.

“The BoT is the highest advisory body and conscience of the party. After the BoT meeting, we will meet with Wike and all aggrieved members and all past presidential aspirants. It is my prayer as Chairman of BoT that the PDP will remain strong to win all elections in 2023,” he said.

“I want to advise all BoT members in the Prof Jerry Gana group to attend the BoT meeting on Wednesday to come out with a common stance of the BoT. After the BoT meeting, we will meet with Atiku, Okowa and Wike to finally resolve the matter to make PDP stronger and very united and enable Atiku and Okowa to win the election hands down.”

The issue of Ayu’s resignation has been on the front burner because of a reported gentleman agreement, which had requested that Ayu should resign should the presidential candidate of the party emanate from the North, but following the emergence of Atiku, it was learnt that the song changed to allow Ayu stay in office till the conclusion of the general elections.

Also, the organ in charge of the day-to-day running of the PDP, the National Working Committee (NWC), has also scheduled a crucial meeting for Wednesday. The terms of the Wike camp is said to have attracted concerns from NWC members.

It was observed that many of the NWC members had engaged one another in informal consultation ahead of the meeting. According to the party’s constitution, the only bodies empowered to cause the removal of the national chairman are the National Executive Committee (NEC) and the National Convention.

Also in attendance were former governors Donald Duke of Cross River, Gabriel Suswam of Benue, Olusegun Mimiko of Ondo, Seriake Dickson of Bayelsa, Ibrahim Idris of Kogi, Jonah Jang of Plateau and Hassan Dankwambo of Gombe. A former Ekiti governor, Ayo Fayose, was also said to have been absent for health reasons.

Also at the meeting were a former PDP Deputy National Vice Chairman (North), Suleiman Nazif; and a former Attorney-General and Minister for Justice, Mohammed Adoke.

Others are sitting and former senators Hosea Agboola, Phillip Aduda, Zainab Kure, Garba Lado, Sandy Onoh, Olaka Nwogwu and many members of the House of Representatives.

A member of the party’s NWC, who spoke on condition of anonymity, told reporters that none of the serving or former governors was leaving the party as was being rumoured. He said all the party chieftains resolved to work together to address whatever internal crisis exists and support the party and the candidates towards victory in the 2023 elections.

Wike had a few days ago accused Atiku of telling lies against him. He also described some of the party’s chieftains as Atiku’s ‘attack dogs.’

Wike’s face-off with Atiku began when the later emerged flag-bearer of the PDP for the 2023 presidential election.

Atiku defeated Wike in the primary and a PDP committee reportedly nominated Wike as the presidential candidate’s running mate, but Atiku settled for Okowa.

In an interview with Arise TV, Atiku said he did not pick Wike as his running mate, because he wanted someone he could work with ‘amicably.’

“Governor Wike was not rejected. Nobody was rejected at the party. But you must understand that it’s the prerogative of the candidate to pick his running mate — a running mate he believes he can work with amicably, and then also deliver the policies of the party, and also try to unify the country.

“Governor Wike is a brilliant politician. He’s courageous, and tenacious. I believe he has a future in the political evolution of this country. It’s not a question of rejection. Certainly, not. I think it’s too harsh a word to say that we rejected governor Wike,” Atiku said.

In a response to Atiku’s interview, Wike tweeted that Nigerians would know the truth about recent events in the party when he finally speaks.

But speaking with reporters on his return from Spain, at the weekend, Wike accused Atiku of lying against him.

Wike’s statement was his first public comment on the crisis that trailed Atiku’s refusal to select him as his running mate.

“I have decided to be quiet because PDP is a party I love so much. I have moved on to conclude my social contract with the people of Rivers. However, it is time to let Nigerians know the truth. I am not a slave and will not be a slave. I am freeborn of the country,” he said.

Buhari’s Planned Impeachment Was Backed By Most Lawmakers – APC Senator