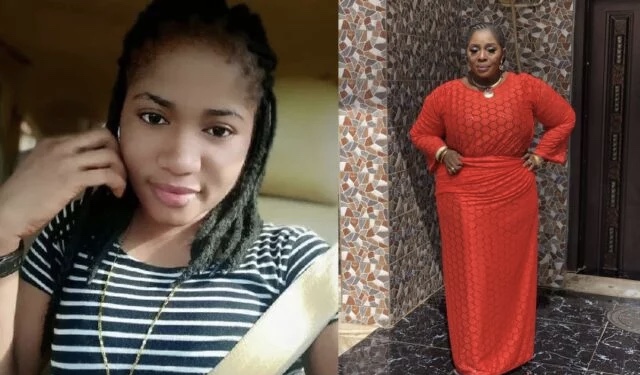 Recall that Chukuemeka Odumeje, a famous prophet, was accused by Ada Jesus of conspiring with the actress to stage fake miracles and assist Edochie in attracting men to sleep with her.

After making the claim in 2020, the comedienne developed a kidney condition that rendered her unconscious and unable to speak a few months later.

Ada Jesus, on the other hand, has released a video from her hospital bed, pleading for help from fans and well-wishers in Nigeria to help her beg famous native doctors Chi Marine, Odumeje, and Edochie.

While many wished her a speedy recovery, others urged her to seek forgiveness, claiming she had been disrespectful to priests, native physicians, and many other prominent people in most of her posts, and that her illness was not typical.

The comedian’s family took her around to beg forgiveness from the many people she had offended in her social media videos.

She was brought to Chi Marine’s shrine to beg forgiveness from the native doctor. He accepted them, forgave her, and performed rituals to undo the curses he had put on her, as well as giving her a sum of 100,000 naira.

However, she was taken to Prophet Odumeje’s church to request forgiveness from the man of God and another church member, Rita Edochie. They flatly declined to forgive her while cursing her even more.

Many social media users denounced Odumeje and Rita Edochie’s conduct, accusing them of not behaving like real Christians.

Rita Edochie has now released a video in which she declares that she has forgiven Ada Jesus, claiming that she has been getting calls from all over the world since the news broke on Sunday.

The veteran actress wrote on Instagram: “ADA JESUS I HAVE FORGIVEN YOU

“I am happy that the WHOLE WORLD has seen that Ada Jesus framed all SORTS of LIES and HEAPED on ME. I have been VINDICATED by Ada’s PREDICAMENTS. The good LORD has FOUGHT my BATTLE for me.
As a RESULT of PLEADINGS from people, PARTICULARLY my FANS, I have FORGIVEN her.
Let HER beg GOD for FORGIVENESS and HEALING.”